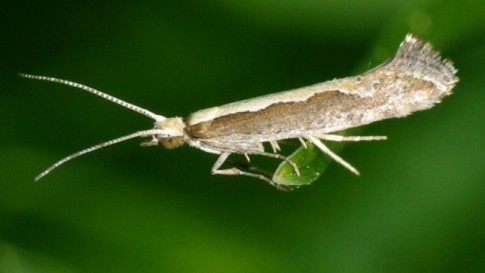 The GM moths are intended to control population levels with an engineered trait that causes female offspring to die in the larval stage. The diamondback moth is a pest for producers of crops like broccoli and cabbage. The plan for the trial includes the release of over a million GM moths every year on a 60-acre site at the experiment station.

In 2014 Dr. Anthony Shelton of Cornell University was granted a USDA permit for the world’s first open air trial releases of a GM diamondback moth. That September, several environmental and farming organizations commented on the U.S. Department of Agriculture’s environmental assessment (EA) for the proposed field release of Oxitec’s GM diamondback moths by Cornell University scientists. The USDA did not contact the organizations to address their myriad concerns or post the required USDA response to the comments. Months later, the groups found out through a separate correspondence with the USDA that the GM moth experiment permit had been quietly approved with no public notification.

In 2015, the experiments were done outdoors in netted cages. In March 2016, Cornell withdrew their permit. But within days a new permit application for an open air field trial was re-submitted. USDA is likely to permit open air trials for the 2017 growing season, although no public information is available about the new application.

“For the last year, we have been asking both USDA and Cornell for more detailed information about the potential impacts of this first of its kind field trial, as well as which regulators will oversee it,” said Jaydee Hanson, Senior Policy Analyst at the Center for Food Safety. “But answers have been few and far between, and it’s not even clear if Cornell has obtained the proper federal approval to conduct this experiment. The regulator and applicant have been secretive throughout the entire process by withholding information from the public in a clear lack of transparency.”

The groups have filed several requests under the Freedom of Information Act since 2015, seeking information about the status of Cornell’s permits for the trial and the reason for the original permit’s withdrawal.

“New Yorkers need to have all the information in hand before these experimental moths are let out in the environment,” said Liana Hoodes from NOFA-NY. “In addition to USDA providing clear answers about federal permits, New York must require a full Environmental Impact Statement under state law, including a public comment period.”

In its environmental assessment, the USDA failed to recognize the risk posed to the reputations of nearby organic farms since genetic engineering, even for pest control, is prohibited under the organic standards. Accidental escapes and contamination could be a significant issue for farmers near the experiment station.

“The developer of this GM moth, Oxitec, has a long track record of conducting GM insect field trials around the world without properly consulting the public or complying with international regulations,” said Dr. Helen Wallace, Director of GeneWatch UK. “Consumers and farmers deserve much better information about GM insects that could end up in the food chain.”

“New technologies like GM insects could have dramatic impacts on the environment and agriculture,” said Wenonah Hauter, executive director of Food & Water Watch. “Given what’s at stake, Cornell cannot go forward with this experiment until it is clear which government agencies will have oversight and that all the risks have been evaluated.”