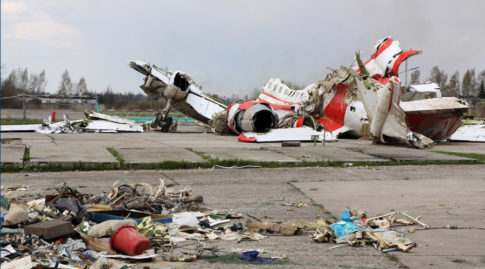 The remains of the late Polish President Lech Kaczynski, his wife and other victims of the 2010 presidential plane crash will be exhumed and examined by Polish prosecutors as part of a re-launched government investigation.

“Comprehensive post-mortem examinations, also using computer tomography in the field of toxicology and DNA will be important for determining the injuries of the victims and the causes of their deaths, as well as to reconstruct the final moments of the disaster and its causes. It is vital to clarify the underlying thread of the investigation, despite several years having passed since the disaster,” a prosecution spokesman told the victims’ relatives at a meeting on Tuesday, explaining the prosecutors’ decision, Radio Poland reports.

The meeting was attended by the leader of Poland’s ruling Law and Justice (PiS) party, Jaroslaw Kaczynski, the twin brother of the president who died in the crash.

The investigators are now holding negotiations with Polish and foreign experts, whom they hope will conduct the exhumations. The dates of the procedures are not yet determined but temperatures in Poland allow exhumations to be carried out from mid-October to mid-April, AP reports.

The move follows the decision of the PiS government to re-launch the investigation into the case. An inquiry initiated by the previous government of the Polish Civic platform (PO) party immediately after the crash returned the verdict of pilot error.

The president’s plane crashed in dense fog on approach to Smolensk Airport in western Russia and two separate commissions of aviation experts in Poland and Russia concluded that insufficient crew training and human error in adverse circumstances were the causes of the crash.

Some PiS party members claim that the crash might have been caused by an explosive device placed on board of the plane. The plane “disintegrated” meters above the ground, Polish Defense Minister Antoni Macierewicz said on Tuesday in Warsaw at the ceremony marking the re-launch of the investigation.

At the same time, Jaroslaw Kaczynski repeatedly accused former Prime Minister Donald Tusk, who is now the head of the European Council, of being indirectly responsible for the crash through negligence.

Prosecutor Maciej Kujawski said autopsy documents received from Russia are incomplete and in some cases erroneous. Doubts raised by the documents led to nine exhumations in previous years. In six cases, bodies were reportedly wrongly identified, the prosecutor added, stressing that new exhumations are needed to confirm all the identities as well.

The PiS government merged the posts of prosecutor general and justice minister in March. This gives the authorities more direct control over the restarted investigation.

Meanwhile, a Polish court found Paweł Bielawny, the former deputy head of the Polish Government Protection Bureau (BOR), guilty of negligence in a case connected to the crash.

Bielawny was found guilty of “knowingly neglecting his duties and exposing Kaczynski to danger by failing to order a proper inspection of Smolensk Airport and failing to send experienced officers to await the plane’s landing,” Deutsche Welle reports.

At the same time, the court said that no explosives were involved in the Smolensk crash.

“The court has no reason to believe that the Smolensk disaster was caused by an attack using explosives,” Judge Paweł Dobosz said on Tuesday, as quoted by the Radio Poland.

“The BOR properly checked the Tu-154 plane for explosives before the flight on 10 April,” he added.

Six years after the crash, conspiracy theories about its causes still circulate in Poland. Some allege it could have been a coup attempt allegedly orchestrated by Moscow. Others go as far as claiming the crash was caused by an “armored” birch tree or an artificially-produced fog.

The plane crashed near Smolensk on April 10, 2010. The catastrophe took the lives of 96 people, including the president, his wife, the central bank chief, all senior military commanders and several lawmakers.

The aircraft was en route to a ceremony to commemorate the 1940 Katyn Forest Massacre, in which thousands of Polish officers were executed by Stalin’s secret police.