Three people were arrested with multiple loaded guns, rifles and ballistic vests at the Holland Tunnel Tuesday when police stopped them for driving with a cracked windshield, authorities tell NBC 4 New York.

The three individuals, two men in their 50s and a woman in her 20s who may be from Pennsylvania, were stopped on the New Jersey side of the tunnel around 8 a.m., authorities said. A search of their vehicle revealed the weapons cache. 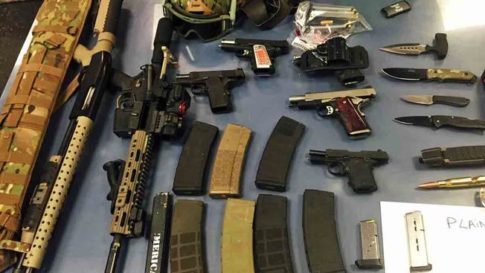 The guns seized included long-range weapons as well as handguns. A camouflage helmet with what appeared to be night goggles was also recovered.

However, in an apparent bid to ease fears of an imminent terrorist attack on NYC, two senior law enforcement officials say the three suspects are so-called “gun enthusiasts” and have no nexus to terror. There is no known threat.

Drugs were in the vehicle along with the guns, according to one law enforcement official. One of the suspects allegedly told authorities the trio was en route to Queens to try to save a friend who is on heroin and being held against her will. Police are looking for the possible woman in Queens.