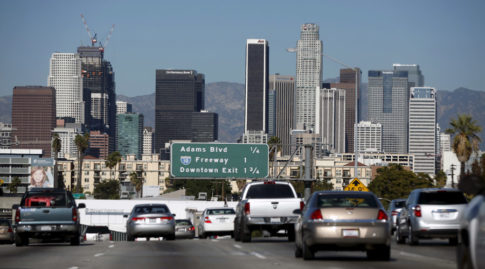 Large scale motion has been detected along the San Andreas Fault line, thanks to new analysis of existing data that could help predict ‘The Big One’ in the future.

While these hotspots were predicted in models before, this is the first time scientists were able to block out white noise and other diluting factors such as precipitation and local surface geology.

Published in the Nature Geosciences journal, researcher Samuel Howell said they were able to use the new modeling technique to “break down the noisy signals to isolate a simple vertical motion pattern that curiously straddled the San Andreas fault.”

If California ever slides into the ocean…it will start right here. I believe that’s the San Andreas Fault pic.twitter.com/IdSv3Zbib3

Vancouver can get an #earthquake too, but Cali has the San Andreas Fault. Look at that red line! #crashCoursepic.twitter.com/IdyEFHZ35v

‘The Big One’ is expected to produce a game-changing earthquake within the next 30 years causing massive devastation to California.

Federal, state, and military officials have been working on contingency plans for the looming disaster, which could see 14,000 dead and 30,000 injured, according to AP.

Catastrophic California quake due at any time, warns seismologist https://t.co/RZbLjfIUZlpic.twitter.com/IQW99lS7wy

A 2005 study published in the journal Nature found the fault had reached a sufficient level of stress for an earthquake of a magnitude greater than 7.0, with the risk concentrated on the area of the fault near Los Angeles.

According to the new research, scientists will be able to study and understand the behavior of faults, even when dormant, using the vertical readings in the hope of predicting activity.

Emergency services will also benefit from more accurate seismic hazard estimates, predicting where on the surface movement is more likely to occur when ‘The Big One’ eventually strikes.

San Francisco’s 1906 earthquake of magnitude 7.8 left more than half of the city’s residents homeless and killed between 700 and 3,000 people.

The view down Sacramento Street in San Francisco, California #after the #great#earthquake of 1906 pic.twitter.com/5LhJLeMahR

Chilling photos of San Francisco after the 1906 earthquake set it ablaze… https://t.co/pf8whgGmrqpic.twitter.com/TqUBmkZXqb