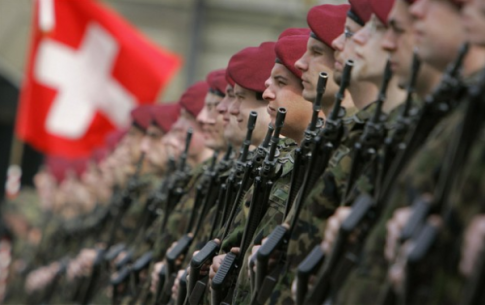 – Switzerland Readies Military In Preparation For A New Wave Of Migrants:

But now, in response to Balkan countries closing down traditional migrant routes to Europe, Switzerland’s military is taking steps to prepare for a potential new wave of immigrants in case it becomes part of a new route.

As such, Switzerland has put together a formal emergency preparedness plan, which outlines three scenarios, one of which would call for military intervention.

The three scenarios outlined by the Swiss government are as follows:

The third scenario is a worst case situation that would call for 2,000 troops to be mobilized in order to secure the border and guard against terrorist threats. Being that it’s also more than three times the number of immigrants that came into the country during the height of the Kosovo crisis in 1999 (which reached 9,600 a month), one can begin to understand the magnitude of the current situation.

From the release [Google translated]

For now, the Federal Council considers that such intervention is not necessary. With Wednesday’s decision, it nevertheless provides power, if necessary, order quickly. According emergency planning of the Confederation, cantons, cities and municipalities, a military intervention would be necessary in scenario 3, that is to say, with 30 000 entries in the territory in space a few days. In scenario 1 (10 000 applications for asylum in 30 days) and Scenario 2 (10 000 requests a month for three consecutive months), the BGC may need to seek the support of the army in case of aggravating circumstances such a terrorist threat of considerable magnitude. Such scenarios have never produced in Switzerland. At the height of the Kosovo crisis, in June 1999, some 9,600 asylum applications were registered. The current figure for March 2016, is about 2,000 requests.

Specifically, the Federal Council instructed the VBS Wednesday to ensure that, if necessary, military in 2000 are available for a support service in connection with the migration situation. All necessary steps must also be taken in case of serious event, an additional battalion (700 soldiers) can be made available to meet any needs of the civilian authorities. Finally the VBS is allowed to contact the police force concerned in view of a possible intervention by militia soldiers to protect foreign diplomatic missions. Professional staff of military security could thus be released for intervention in support of the BGC.

This support service at BGC would be set up under Art. 67, para. 1 letter. e, the Army Act (LAAM). According to Art. 70 LAAM, competence to put troops on foot and assign them to civil authorities is the federal Council. If the development includes more than 2,000 military and it lasts more than three weeks, the Federal Assembly must approve the commitment in the next session. If the engagement ends before the session, the Federal Council shall report to the Federal Assembly.

The civil authority assumes responsibility for the intervention

The terms of a possible intervention of the BGC support army are regulated by the Ordinance on the use of troops to secure the border police (OSPF). According to the provisions of this Ordinance, it is the civilian authority that gives the mission to the army, which specifies police powers and determines if the firearm is necessary for that purpose. The troop can only intervene to perform the tasks for which it has both the instruction that the proper equipment. It can not be appealed to the recruits training. It is the civil authority which is responsible for the intervention of the troops.

Beyond this support service at BGC, the military can also, for example, support the Secretariat of State for Migration (SEM) or the health authorities in the fields of health, logistics or transportation providing troops and equipment. The VBS also supports SEM in research and the provision of necessary accommodation places in accordance with the reference values ??of emergency planning for asylum established April 14, 2016 by the FDJP, DDPS, the DFF, cantons, cities and municipalities. The prevailing principle is that the needs of the army and the protection of the population (education, operation of the service and commitment of the army) have priority over asylum needs. According to emergency planning, the Confederation will provide lasting 6,000 accommodation places, notably to ensure the registration of the applicants. In scenario 3, it is up to 9000 places that are planned. SEM, with the support of VBS, has already increased the number of places around 2200-4600 during the past year.

This comes just 4 months after Swiss army chief André Blattmann warned the risks of social unrest in Europe are soaring. Recalling the experience of 1939/1945, Blattman fears the increasing aggression in public discourse is an explosively hazardous situation, and advises the Swiss people to arm themselves and warns that the basis for Swiss prosperity is “being called into question.”

It would seem a wave of fresh migrants flooding through the nation may just be the catalyst for that “social unrest.”