The feud between the FBI and the Department of Justice over whether or not to proceed with charges against Hillary Clinton in the ongoing email investigation just took an unexpected turn.

Recall that one month ago, we found out that on one hand, the FBI is seemingly hell-bent on chasing down every possibly angle involving Hillary’s email abuse, when we reported that one hundred forty-seven FBI agents have been deployed to chase down clues and leads and that the FBI has accelerated the investigation because officials want to avoid the possibility of announcing any action too close to the election. A former Clinton staffer is also cooperating with that investigation, and it’s believed Clinton herself will be questioned.

The flipside has been the Department of Justice which has been stonewalling the probe every step of the way. It hasn’t been alone in its unwillingness to pursue Hillary: on April 1, the state department announced that it is suspending its probe of “top secret” Clinton emails.

The divergence of these two paths, one which wants to get to the bottom of Hillary’s email probe and the other which is dead set on blocking it, has led online betting markets such as PredictIt to put the the odds of federal charges being filed against Hillary at record lows. 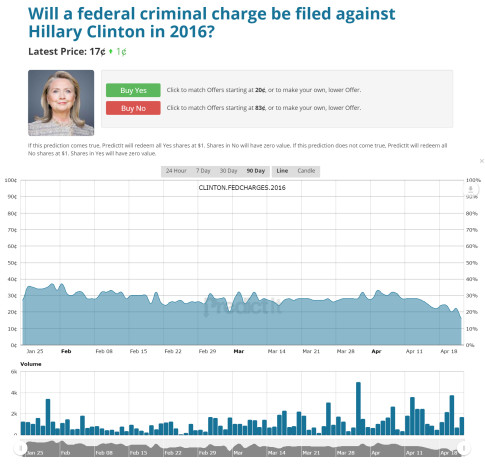 Which, paradoxically, could be bad news for Hillary.

On Friday, US Senator Chuck Grassley who chairs the Senate Judiciary Committee, and who has pushed for additional scrutiny of Clinton’s email use during her tenure as secretary of state, dropped a dramatic “hint” during a breakfast meeting with the Des Moines A.M. Rotary club when he suggested that the FBI “might leak”, hypothetically-speaking of course, reports of its investigation into presidential candidate Hillary Clinton’s use of a private email server as secretary of state.

In practically laying out the next steps in Hillarygate, Grassley said “an anonymous and unauthorized release of FBI investigative materials could result if officials at the agency believed prosecution of Clinton was stymied for political reasons” according to the Des Moines register.

The senior senator’s musing came in response to a long answer to a very general question from one of the Rotarians about the status on inquiries into the email server and Clinton’s handling of the 2012 terrorist attack on a diplomatic post in Benghazi, Libya.

Which, of course, would be potentially devastating for Hillary as not only would her misdeed as chronicled by the Feds be fully in the open and ammo for any of her competitors in the presidential race, but would also confirm that the Department of Justice is anything but, and has led to such a dramatic perversion of the law as being forced to leak evidence of criminality in the public arena just so the population can be made aware of Hillary’s actions.

As for Grassley’s unorthodox “suggestion”, when asked by Radio Iowa reporter O. Kay Henderson after the breakfast if he was suggesting the FBI should leak investigative findings, Grassley expounded on his comment.

Yes, Chuck, we get it. And now we wonder how long before a treasure trove of “leaked” FBI documents exposing the full extent of Hillary’s action is leaked, although we can’t help but wonder that just like the Panama Papers dump, the media will be prepared and will promptly redirect the public’s attention to Vladimir Putin once again as the guilty party behind it all.