Goldenport, one of the last shipping companies left on the London Stock Exchange, has delisted from the market and sold off six of its remaining eight vessels for $1…

…”average daily hire rates have fallen below even a vessel’s daily operating expenses.”

As Bloomberg reported at the time,

Rates for Capesize-class ships plummeted 92 percent since August to $1,563 a day amid slowing growth in China. That’s less than a third of the daily rate of 3,950 pounds ($5,597) to rent a Ferrari F40, the price of which has also fallen slightly in the past few years, according to Nick Hardwick, founder of supercarexperiences.com.

The Baltic Exchange’s rates reflect the cost of hiring the vessel but not fuel costs. Ships burn about 35 metric tons a day, implying a cost of about $4,000 at present prices, data compiled by Bloomberg show.

One would think, considering how much the Baltic Dry Index has ‘surged’ off its all-time record lows – and the noise being spewed by Cramer et al. that this is somehow indicative of the “big comeback” in the Chinese (and world) economies – that the situation would have improved… But it has not!

For the cost of $1 – less than the price of a Grande Black Coffee at Starbucks – you too can be the owner of a 58,429 deadweight tonne bulk carrier…

Goldenport, one of the last shipping companies left on the London Stock Exchange, has delisted from the market and sold off six of its remaining eight vessels for $1…

The giveaway reflects the most dismal shipping conditions in decades, caused by economic slowdown in China combined with an oversupply of vessels due to a building spree during a previous boom and the fact that “average daily hire rates have fallen below even a vessel’s daily operating expenses.”

The Greek owners are looking for buyers for two remaining vessels and are taking Goldenport off the stock market, saying it no longer makes sense to list shares which have dropped from highs of $100 in 2007 to less than 2c now.

John Dragnis, the chief executive of Goldenport, said “Dry bulk vessels generally have fallen in value by around 60% over the last year partly because of extreme oversupply and partly because of low demand for coal as China moves towards renewable energy to curb [carbon] emissions,” adding that “The prevailing market conditions are probably the worst of the last 30 years.”

All of which seems very odd given the aforementioned resurgence of the Baltic Dry – unless that is not reflecting reality (like so many other indicators).which leaves us to wonder if all this exuberant excitement with regard the Baltic Dry Index’s resurrection from the dead is just more China-credit-fueled smoke-and-mirrors speculation – just as it was in 2009 when QE unleashed hope, only to be dashed on the shores of demand-doldrum-reality… 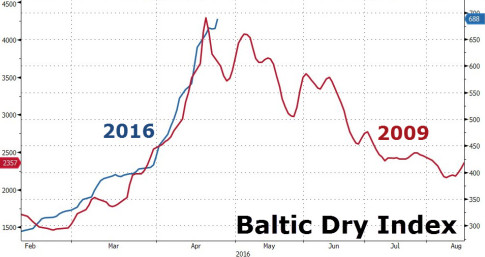 Richard Fulford-Smith, the founder of the Affinity shipbroking firm and a leading figure in the London maritime scene, said the bulk shipping markets were in “a sad state” and there could be more bankruptcies and exits before any bounce back. Fulford-Smith, 60, added: “I will probably be retired by the time there is any real recovery.”