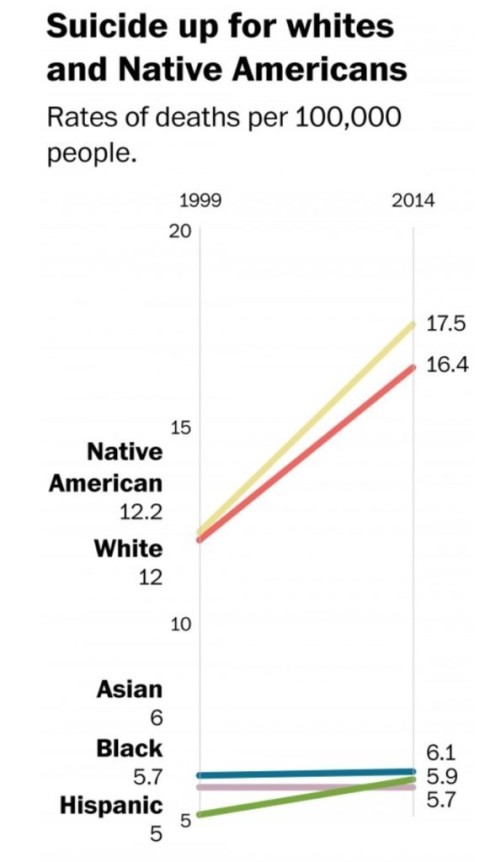 Police were also vague about the sign, saying only that it related to “social justice.” Bishop said two others who witnessed the shooting told him that it said, “Tax the one percent,” and that he seemed to raise it just before pulling the trigger.

Jim White was at the Capitol Visitor Center when the announcement of the lockdown came over the loudspeaker. He said there was no panic, just chatter about what could be going on outside. His 1:30 p.m. tour went on as scheduled. The only indication that something was amiss: The tour guide kept stretching and extending his talk.

Bernard called the incident “a bit unfortunate,” especially with all the tourists in town to see the cherry blossoms.

Yes, so unfortunate that someone blowing their brains out potentially due to economic serfdom got in the way of cherry blossom selfies.

– From the post: Illinois Man Commits Suicide in Front of U.S. Capitol Holding a “Tax the 1%” Sign

If you’ve lived life on this planet more than a handful of years, you’ve undoubtedly had your fair share of tough times, some of us more so than others. The fact that you’re here today reading this is a testament to your ability to overcome these struggles, and the experiences these hard times have provided you has shaped the person you are today.

For some people, a combination of life circumstances, mental and emotional difficulties, and lack of support from friends and family can lead to suicide. The thought that some people can become so overwhelmed with hopelessness and desperation they take their own lives is a haunting one.

Sadly, it is undeniable that this reality has become more and more prevalent in America as the 21st century has unfolded, and I don’t think it’s a coincidence that we’ve seen this flare up during a decade and a half characterized by a pummeling of the middle class, a decimation of civil liberties, and the entrenchment of a callous and corrupt political and economic oligarchy.

My heart goes out to the families of all those affected by this growing problem, and those who are currently struggling with suicidal thoughts. Although I can’t relate to such thoughts, I can sympathize.

The U.S. suicide rate has increased sharply since the turn of the century, led by an even greater rise among middle-aged white people, particularly women, according to federal data released Friday.

Last decade’s severe recession, more drug addiction, “gray divorce,” increased social isolation, and even the rise of the Internet and social media may have contributed to the growth in suicide, according to a variety of people who study the issue.

But economic distress — and dashed hopes generally — may underpin some of the increase, particularly for middle-aged white people. The data showed a 1 percent annual increase in suicide between 1999 and 2006 but a 2 percent yearly hike after that, as the economy deteriorated, unemployment skyrocketed and millions lost their homes.

Hey, at least we bailed out the bankers.

“People [were] growing up with a certain expectation . . . and the Great Recession and other things have really changed that,” said Julie A. Phillips, a professor of sociology at Rutgers University who studies the demography of suicide. “Things aren’t panning out the way people expect. I feel for sure that has had an effect.”