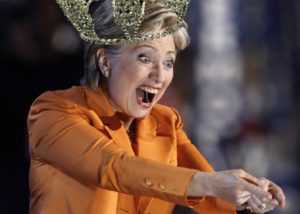 We’re going to war — either hybrid in nature to break the Russian state back to its 1990s subordination, or a hot war (which will destroy our country). Our citizens should know this, but they don’t because our media is dumbed down in its “Pravda”-like support for our “respectable,” highly aggressive government. We are being led, as C. Wright Mills said in the 1950s, by a government full of “crackpot realists: in the name of realism they’ve constructed a paranoid reality all their own.” Our media has credited Hillary Clinton with wonderful foreign policy experience, unlike Trump, without really noting the results of her power-mongering. She’s comparable to Bill Clinton’s choice of Cold War crackpot Madeleine Albright as one of the worst Secretary of States we’ve had since … Condi Rice? Albright boasted, “If we have to use force it is because we are America; we are the indispensable nation. We stand tall and we see further than other countries into the future.”

Hillary’s record includes supporting the barbaric “contras” against the Nicaraguan people in the 1980s, supporting the NATO bombing of the former Yugoslavia, supporting the ongoing Bush-Iraq War, the ongoing Afghan mess, and as Secretary of State the destruction of the secular state of Libya, the military coup in Honduras, and the present attempt at “regime change” in Syria. Every one of these situations has resulted in more extremism, more chaos in the world, and more danger to our country. Next will be the borders of Russia, China, and Iran. Look at the viciousness of her recent AIPAC speech (don’t say you haven’t been warned). Can we really bear to watch as Clinton “takes our alliance [with Israel] to the next level”? Where is our sense of proportion? Cannot the media, at the least, call her out on this extremism? The problem, I think, is this political miasma of “correctness” that dominates American thinking (i.e. Trump is extreme, therefore Hillary is not).

– From the post: “We’re Going to War” – Oliver Stone Opines on the Dangerous Extremism of Neocon Hillary Clinton

I’ve really enjoyed reading Camille Paglia this election season, and I find her to be one of the most astute cultural and political observers in America today. She also happens to be a wordsmith.

What follows are a few choice excerpts from her latest masterpiece, Enough With the Hillary Cult: Her Admirers Ignore Reality, Dream of Worshipping a Queen:

What is it with the Hillary cult?

As a lifelong Democrat who will be enthusiastically voting for Bernie Sanders in next week’s Pennsylvania primary, I have trouble understanding the fuzzy rosy filter through which Hillary fans see their champion. So much must be overlooked or discounted—from Hillary’s compulsive money-lust and her brazen indifference to normal rules to her conspiratorial use of shadowy surrogates and her sociopathic shape-shifting in policy positions for momentary expedience.

Hillary’s breathtaking lack of concrete achievements or even minimal initiatives over her long public career doesn’t faze her admirers a whit. They have a religious conviction of her essential goodness and blame her blank track record on diabolical sexist obstructionists. When at last week’s debate Hillary crassly blamed President Obama for the disastrous Libyan incursion that she had pushed him into, her acolytes hardly noticed. They don’t give a damn about international affairs—all that matters is transgender bathrooms and instant access to abortion.

The protective major media phalanx around Hillary certainly extends to her health issues, which only the Drudge Report has had the courage to flag. In assessing possible future occupants of the White House, the public has an inalienable right to know. I was incredulous at the passive gullibility of the media, including the New York Times, last July, when a woman internist, identified as Hillary’s doctor, released a summary letter about her health that was lacking in the specifics one would normally expect in medical records. Does anyone really think that world-renowned Hillary, whose main residence for years has been in Washington and not Chappaqua, has as her primary physician an obscure young internist in Mount Kisco, New York? It’s ludicrous on the face of it.

And what about that persistent cough? “Allergy season,” the hacking Hillary claimed on a New York radio show this week. (“You all right? Any mouth to mouth CPR?” joked a host.) I’m just a Ph.D., not an M.D., but I’ll put my Miss Marple hat on here. Am I the only one who noticed Hillary’s high-wrap collar, pallid, puffy face, and bulging eyes during her choleric New Hampshire primary concession speech in February? (Another unusually high collar followed the next morning.)

My tentative theory is that Hillary may have sporadic flare-ups of goiter, worsened under stress. Coughing is a symptom. High collars mask a swollen throat. In serious cases, an operation may be necessary. Is this chronic thyroid condition disqualifying in a presidential candidate? Certainly not in my view, but I don’t like being lied to—by candidates, campaign staffs, or their media sycophants.

As we all know by now…

I Was Wrong About Donald Trump: Camille Paglia on the GOP Front-Runner’s Refreshing Candor

Blast From the Past – Hillary Clinton vs. Bernie Sanders on Panama