A fine for doing God’s work? 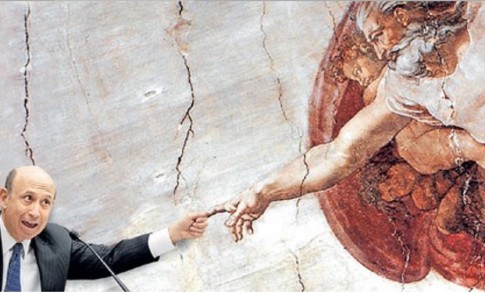 Hot on the heels of Wells Fargo’s $1.2 billion settlement, Bloomberg reports that Goldman Sachs will pay $5.1 billion to settle a U.S. probe into its handling of mortgage-backed securities involving allegations that loans weren’t properly vetted before being sold to investors as high-quality bonds.

“This resolution holds Goldman Sachs accountable for its serious misconduct in falsely assuring investors that securities it sold were backed by sound mortgages, when it knew that they were full of mortgages that were likely to fail,” said Acting Associate Attorney General Stuart Delery.

The Justice Department announced a $5 billion settlement with Goldman Sachs over the sale of mortgage-backed securities leading up to the 2008 financial crisis.

The deal announced Monday resolves state and federal probes into the sale of shoddy mortgages before the housing bubble and economic meltdown.

It requires the bank to pay a $2.4 billion civil penalty and an additional $1.8 billion in relief to underwater homeowners and distressed borrowers, along with $875 million in other claims.

The agreement is the latest multi-billion-dollar civil settlement reached with a major bank.

Other banks that settled in the last two years include Bank of America, Citigroup and JPMorgan Chase & Co.

Goldman had previously disclosed the settlement in January, but federal officials laid out additional allegations in a statement of facts.

NEW YORK – Attorney General Eric T. Schneiderman today joined members of the state and federal working group he co-chairs to announce a $5 billion settlement with Goldman Sachs over the bank’s deceptive practices leading up to the financial crisis.  The settlement includes $670 million – $480 million worth of creditable consumer relief and $190 million in cash – that will be allocated to New York State. The resolution requires Goldman Sachs to provide significant community-level relief to New Yorkers, including resources that will facilitate a significant expansion of the New York State Mortgage Assistance Program enabling distressed homeowners to restructure their debt, as well as first-lien principal forgiveness, and funds to spur the construction of more affordable housing.  Additional resources will be dedicated to helping communities transform their code enforcement systems, and invest in land banks and land trusts.

The settlement was negotiated through the Residential Mortgage-Backed Securities Working Group, a joint state and federal working group formed in 2012 to share resources and continue investigating wrongdoing in the mortgage-backed securities market prior to the financial crisis.

“Since 2012, my number one priority has been getting New Yorkers the resources they need to rebuild,” Attorney General Schneiderman said. “These dollars will immediately go to work funding proven programs and services to help New Yorkers keep their homes and rebuild their communities. We’ve witnessed the incredible impact these programs and services can have in helping communities recover from the financial crisis. This settlement, like those before it, ensures that these critical programs—such as mortgage assistance, principal forgiveness, and code enforcement—will continue to get funded well into the future, and will be paid for by the institutions responsible for the financial crisis.”

The settlement includes an agreed-upon statement of facts that describes how Goldman Sachs made multiple representations to RMBS investors about the quality of the mortgage loans it securitized and sold to investors, its process for screening out questionable loans, and its process for qualifying loan originators.  Contrary to those representations, Goldman Sachs securitized and sold RMBS backed by large numbers of loans from originators whose mortgage loans contained material defects.

In the statement of facts, Goldman Sachs acknowledges that it securitized thousands of Alt-A, and subprime mortgage loans and sold the resulting residential mortgage-backed securities (“RMBS”) to investors for tens of billions of dollars.  During the course of its due diligence process, Goldman Sachs received pertinent information indicating that significant percentages of the loans reviewed did not conform to the representations it made to investors.  Goldman also received and failed to disclose negative information that it obtained regarding the originators’ business practices.  Indeed, Goldman’s due diligence vendors provided Goldman with reports reflecting that the vendors had graded significant numbers and percentages of sampled loans as EV3s, i.e., not in compliance with originator underwriting guidelines.  In certain circumstances, Goldman reevaluated loan grades and directed that such loans be waived into the pools to be purchased or securitized.

Even when the percentage of problematic loans in pools sampled by it vendors indicated that the unsampled portions of the pools likely contained additional such loans, Goldman typically did not increase the size of the sample or review the unsampled portions of the pools to identify and eliminate any additional such loans.   In many cases, 80 percent or more of the loans in the loan pools Goldman purchased and securitized were not sampled for credit and compliance due diligence.  Nevertheless, Goldman approved various offerings for securitization without requiring further due diligence to determine whether the remaining loans in the deal contained defects.  A Goldman employee overseeing due diligence for a particular loan pool noted that the pool included loans originated with “[e]xtremely aggressive underwriting” and “large program exceptions made without compensating factors.”  Despite this observation, Goldman did not review the remaining portion of the pool, and subsequently securitized thousands of loans from the pool.

Goldman made statements to investors in offering documents and in certain other marketing materials regarding its process for reviewing and approving originators, yet it failed to disclose  to investors negative information it obtained about mortgage loan originators and its practice of securitizing loans from suspended originators.

Beginning in mid-2006, Goldman recognized that Fremont, a “key originator, was experiencing an increasing level of early payment defaults (“EPDs”) (i.e., loans for which the borrowers had failed to make one or more of their first payments).  Goldman was aware that EPDs were a sign of originators’ bad credit decisions and could be indicators of potential borrower fraud.  However, Goldman did not put Fremont on its “no bid” list and continued to purchase loan pools from Fremont during the period Fremont’s EPD claims remained unpaid.  Moreover, Goldman “[u]ndertook a significant marketing effort” to tell investors about what Goldman called Fremont’s “commitment to loan quality over volume” and “significant enhancements to Fremont underwriting guidelines.”    Likewise, Goldman identified issues with Countrywide’s origination practices.  Goldman’s head of due diligence, when presented with a “very bullish” equity report on Countrywide, another large originator, exclaimed “[i]f they only knew  . . . . . . . . . . . . . . . . . . . . . . . . . . . . . . . . . .”

Monday’s resolution is the fifth multibillion-dollar settlement reached with U.S. banks resulting from the government’s push to hold Wall Street firms to account for creating and selling subprime mortgage bonds that helped spur the 2008 financial crisis.

As Bloomberg notes, however, other banks, including Royal Bank of Scotland Group Plc and Deutsche Bank AG remain under investigation, people familiar with the matter have said. 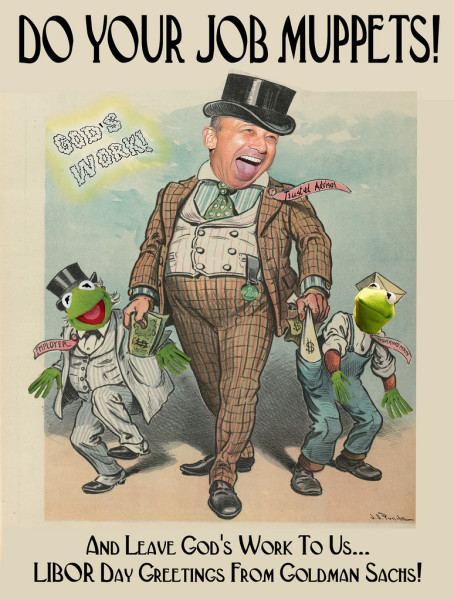