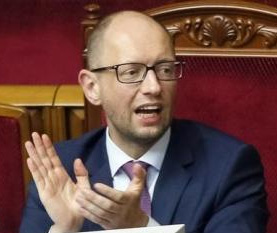 Did the Panama Papers just claim their second victim?

Just days after Rothschild was forced to defend Ukraine’s billionaire president Petro Poroshenko from his involvement in with the Panamanian tax haven law firm Mossack Fonseca, when it said that “as a matter of principle, we never comment on individuals or client relationships, but on this occasion we have been authorized by our client to confirm that Rothschild Trust has been appointed by Mr Poroshenko as trustee of a blind trust to hold his shares in Roshen”, moments ago Ukraine’s embattled prime minister Arseniy Yatsenyuk announced that he had resigned, according to local media reports.

“I decided to resign from the post of Ukraine’s prime minister. On Tuesday, April 12, the decision will be submitted to the Verkhovna Rada [Ukrainian parliament]”, Yatsenyuk said as quoted by Ukrainian TV channels Sunday.

Yatsenyuk said that destabilization in Ukraine is “inevitable” if a new government is not formed, which is a dramatic change from his position just several weeks ago when he decided to dig in to his post, created by the active US intervention in early 2014 when “Yats” was preappointed to run the local government by none other than the Assistant Secretary of State for European and Eurasian Affairs at the United States Department of State, Victoria Nuland.

“We cannot allow one thing [to happen] — the destabilization of the executive power during the war [in the southeastern region of Donbass]. This prospect is inevitable, if after the resignation, a new government is not formed” the now former Prime Minister said.

“Since now, I see my goals broader than the powers of the government head.”

Yatseniuk added that his party, the Popular Front, will remain a part of the coalition in the parliament. Earlier, Ukrainian Prime Minister Arseniy Yatsenyuk’s government survived a no-confidence vote, which provoked various factions to leave the ruling parliamentary coalition.

Recently, Ukrainian President Petro Poroshenko nominated Chairman of the Verkhovna Rada and his party fellow Volodymir Groisman for the new country’s prime minister. The news about Groisman’s candidacy came a few days after Ukrainian Finance Minister Natalia Yaresko announced her willingness to become Prime Minister herself and lead a “government of technocrats.”

The resignation comes at a very sensitive time for Ukraine, just days after a historic Dutch referendum rejected closer ties with Ukraine in a blow to EU unity and a major success for Euroskeptics.

Meanwhile, not too far away…