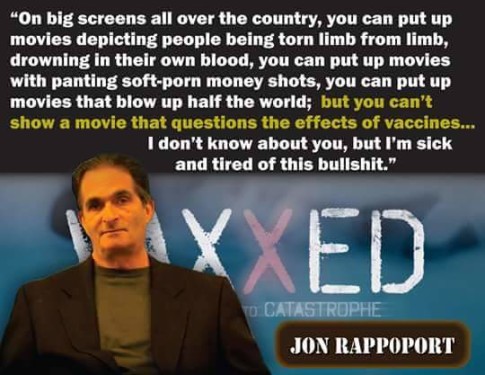 – Why Vaxxed was shot down at Tribeca—up close and personal:

Why was Vaxxed shut down?

The answer? Jane Rosenthal and her (ex) husband, Craig Hatkoff.

That’s my opinion, my story, and I’m sticking to it.

Yes, there were other pressures on Robert De Niro. I know all about them. But Jane Rosenthal and her husband Craig are very, very tight with De Niro.

From Crain’s New York Business 2007: “Jane Rosenthal is the business brains behind the wheel of New York’s most famous taxi driver: Robert De Niro. The duo, who founded Tribeca Productions in 1989, has produced 22 movies.

“Perhaps Ms. Rosenthal’s most important contribution to the city, however, came in the wake of the Sept. 11 attacks. She and Mr. De Niro, along with Ms. Rosenthal’s husband, real estate financier Craig Hatkoff, launched the Tribeca Film Festival to help revive downtown.”

Now, moving along: Jane Rosenthal’s husband, Craig Hatkoff, sits on the board of the NYU Child Study Center in New York—and that major, major Center is deeply involved in the research, study, and treatment of child psychiatric disorders. In case you’ve forgotten, autism is officially listed as a psychiatric disorder.

The NYU Center would never, ever, in a million years imagine that vaccines could cause autism. If they did imagine it, they’d shut up and march straight ahead with their brain imaging studies and other mainstream distractions.

The Rosenthal-Hatkoff duo have been on the scene at a number of Center fundraisers and awards dinners. They’re active. They’re visible. They’re players.

Here is a statement from the NYU Child Center’s website: “At the Child Study Center, the Center for Neurodevelopmental Disorders (CND) is committed to research in neurodevelopmental disorders, leveraging establish[ed] strengths in Autism Spectrum Disorder, ADHD and animal studies on early development, as well as collaborating closely with our clinical partners.”

The Center has an Autism Spectrum Disorders Clinical and Research Program, where it carries out orthodox and “cutting edge” work on autism.

And the Center is expanding. This is a big-time operation:

“Through collaborative efforts, these organizations work with the NYU Child Study Center to integrate the highest level of clinical care, ground-breaking research, and training for the next generation of leaders in child and adolescent mental health. In addition, the diverse locations open the doors to treatment for families in Westchester, Rockland and Putnam Counties; as well as throughout New York City.

“With the partnerships among these world-class institutions, we are establishing a new multidisciplinary model for advancing the prevention, identification and treatment of child psychiatric disorders on a national scale.”

A film that claims to show a link between the MMR vaccine and autism would be a hideous affront to the NYU Child Study Center, where Craig Hatkoff, co-founder of the Tribeca Film Festival, sits on the Board.

A plan to actually show Vaxxed at the Tribeca Festival, which Hatkoff and Rosenthal co-founded, would be a blow to the face of the NYU Center.

New York, like other big cities, operates across a level of wealth and influence that relies on social connections. Heavy connections.

In New York, money, real estate, Wall Street, politics, the arts, the medical hierarchy are all joined socially. At the hip.

Jane Rosenthal and her husband, Hatkoff, are definitely part of that mix. There was no way Rosenthal was going to let that film on the screen at Tribeca. It would have mangled many of her social relationships.

Then there is this: The NYU Child Study Center depends on a great deal of funding from the National Institute for Mental Health (NIMH).

So it could have gone this way. A player at NIMH calls the NYU Center; “I understand the Tribeca film Festival is going to show an insane film about vaccines causing autism. Craig Hatkoff, Jane Rosenthal’s husband, sits on your Board. Talk to the man. Straighten him out. Get him to come to his senses. What’s next? Is Tribeca going to sponsor a positive film about gun-toting militias taking over three Western states?”

Meanwhile, the CDC and the Sloan Foundation were making their pitches to shut down the film, but there is a strong probability those efforts were passing through Hatkoff or Rosenthal, too, because they’re very close to De Niro, and he was the one who needed to be convinced.

Have a look at this recent FOX 5 NY interview, where De Niro and Rosenthal sit side by side. She looks for all the world like a “minder,” as the British would say. A gatekeeper. A worried monitor, keeping tabs on De Niro. He mentions that he still thinks the film should be shown, but not at Tribeca. She makes sure to emphasize that the film is not going to be shown at Tribeca, in case anyone has misinterpreted De Niro’s remarks.

She looks exhausted, as if she’s had some sleepless nights, as if she’s thinking: “How many of my New York friends do I have to apologize to before this is over? I can’t blame Bob, he’s my friend and partner, so I just shrug and say, ‘Thank goodness we’re moving on.’ But will they look at me the same way after this disaster? Will things be the same? I never wanted to accept that goddamn film in the first place. I told Bob it was a mistake. And the people at the NYU Center. What am I supposed to do about them?”

Against this force, he was a bit player in a hurricane.

For a minute, he stood up for the film, and because he was famous, he almost landed a leading role in a production called, Exposing the Truth about Vaccines Causing Autism. But the project was quickly squashed.

It took an independent theater chain in the city, the Angelika, to step up to the plate and screen Vaxxed (trailer). However, the Angelika doesn’t have a thousandth of the clout of the Tribeca Film Festival.

The upside? Jane Rosenthal and her husband, Craig Hatkoff, don’t sit on Angelika’s Board.