His letter to the head of the IMF is below:

I am writing to you to express my deep concern about publications on the position of IMF officials with key roles in the Greek program.

The first issue is, of course, whether their position reflects the official IMF view. Using a credit event as a means to pressurize Greece and the other member states is clearly beyond the bounds of the negotiation process as we understand it.

The second issue is whether Greece can trust, and continue negotiating in good faith with, IMF officials who express views such as those expressed in these publications. Particularly so as they seem to be threatening to delay the process in the belief that only a credit event will work to extract concessions. Successful negotiations are often difficult but they always require trust and credibility from all sides. I sincerely hope that the IMF position is to reach a quick, successful and sustainable conclusion of the review and I am sure you will take all necessary measures to ensure that the negotiation process will remain on track.

As always, I would be happy to talk to you any time on these issues, as I am sure your share my concern.

A snapshot of the letter: 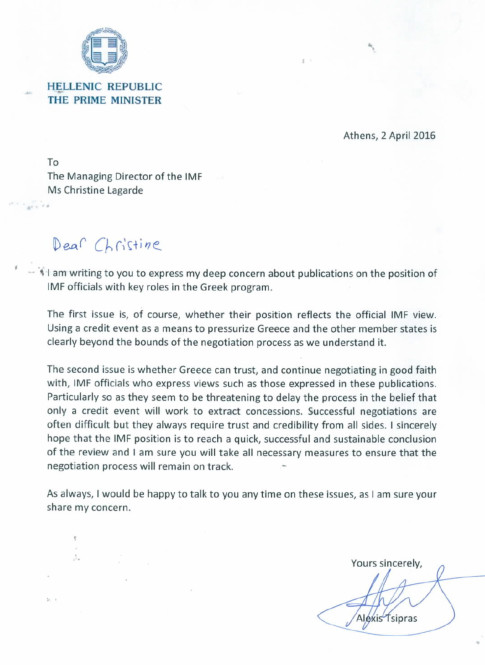 While we expect that this latest scandal will quickly be forgotten, what we find most paradoxical about the situation is that the Greek ire is focused on the one entity that, while hardly innocent as per Lagarde’s previous comments, is actually is pushing for a Greek debt reduction over the refusal of European, and especially German, institutions. Granted, we also understand the Greek ire: being used as guniea pigs by the IMF in its policy battle with other NGOs is hardly pleasing and if anything, is a reflection of the Greek recent collapse into quasi-vassal status and ongoing ward of the ECB. Recall that Greece still has capital controls as its banking system is completely insolvent, and that this leverage Europe has over the country and the money of its savers will not change for a long time.