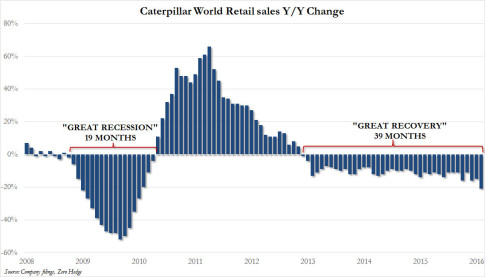 Caterpillar is the world’s premier heavy equipment manufacturer, from tractors to locomotives to engines of every shape and size.  As such, Caterpillar is used as a litmus test for the global economy.  More sales by Caterpillar means more people around the world using heavy equipment to produce and build.  Less sales means falling production and crashing demand globally.  Currently, Caterpillar is suffering from one of the longest losing streaks in the company’s history – over 37 straight months of significant year over year retail losses.  That is three years of solid decline.  The mainstream has attempted to pin the lack of demand for Caterpillar machinery on the dramatic fall in oil prices (approximately 50% decline in the past six months), however, oil prices do not explain the three year span of negative year over year profits.  The ONLY thing that explains Caterpillar’s troubles is a crisis level collapse in global demand.  Period.  Caterpillar is a signal, like the Baltic Dry Index, and like oil to some extent.  As the current bear market rally in equities tops out and fizzles over the next two weeks, keep in mind the fundamentals.  A system that requires exponential growth to survive cannot last long under the weight of collapsing demand.  There is nothing that anyone, including central banks, can do to avoid this reality…

Until Thursday, Caterpillar wasn’t in the habit of giving analysts and investors specific quarterly guidance. But with Wall Street expecting too much from the mining and equipment giant in the face of slowing global economic growth and a plunge in commodities, executives tried to lower the bar for next month’s earnings report.

Speaking at a Bank of America Merrill Lynch conference in London Thursday, vice president of financial services Mike DeWalt gave up on efforts to imply that the company’s results will be weaker than the Street’s projected 95 cents in earnings per share.

“We’ve never really provided actual sales and profit guidance by quarter before…but we have been unable to get consensus moved,” DeWalt said, before offering first-quarter guidance for earnings from 50-55 cents per share, or 65-70 cents excluding restructuring costs. Revenue is expected to come in between $9.3 billion and $9.4 billion, below the Street consensus of$10.3 billion.

DeWalt expressed frustration that efforts to nudge analyst estimates lower weren’t successful at two prior conferences. “[W]e’ve been somewhat subtle in trying to set expectations around the first quarter,” he said. “This is not as a result of having seen the first couple of months of the quarter.”