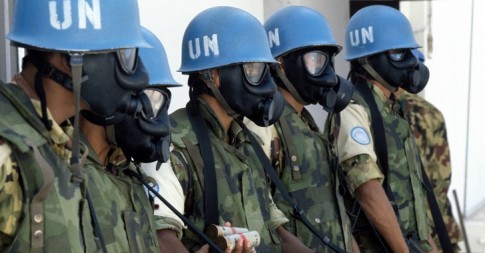 Over 100 women and girls in the Central African Republic (CAR) have accused U.N. peacekeepers of sexual assault, and three girls claim they were forced by French troops to participate in bestiality. Though some reports are as of yet unconfirmed, the most recent allegations — the most widespread to date in an ongoing, unraveling saga of systemic assault and rape — are consistent with multiple previous reports of U.N. peacekeepers committing sexual abuse. The most recent allegations span from 2013 to 2015, though an additional rape of a teenage girl was reported as recently as Monday, March 28.

The Associated Press (AP) reported earlier this week that the U.N. announced it was presented with new allegations of abuse on the part of Burundi, Gabonese, and French troops in the Central African Republic, where the U.N. has operated its peacekeeping mission. The mission, the Multidimensional Integrated Stabilization Mission in the Central African Republic (MINUSCA), has been in place since 2014. The U.N. overtook authority from African union troops in September 2014, and since that time, dozens of allegations of abuse have been made against the peacekeepers. France, which formerly colonized CAR, has had troops in the nation since 2013.

As AP noted, the U.N. is now investigating 108 claims of sexual abuse from women and girls in the region. The number “far eclipse[s] the 22 allegations of sexual abuse and exploitation in Central African Republic in 2015 that the U.N. reported earlier this month.” U.N. spokesperson Stephane Dujarric said a U.N. team in Kemo prefecture, east of the capital Bangui, had spoken with the accusers, the “vast majority” of whom are minors. A press release issued Thursday says the U.N. is still determining the number of allegations, noting MINUSCA has sent a task force to CAR to investigate on the ground.

On Thursday, Code Blue, a campaign by AIDS-Free World, focused on combating sexual abuse around the world, announced that two weeks prior, UNICEF had interviewed 98 girls and women who alleged sexual assault in the CAR. By March 26, as the advocacy group stated, MINUSCA had interviewed the 108 individuals referenced in the AP report.

Code Blue reported that during these interviews, multiple girls alleged a French military commander, part of the French military intervention in CAR Sangaris, forced them to participate in bestiality:

“During that visit, three victims interviewed by a MINUSCA Human Rights Officer reported that in 2014, they and a fourth girl were tied up and undressed inside a camp by a military commander from the Sangaris force (the French military intervention in CAR) and forced to have sex with a dog. Each girl was then given 5000 Central African Francs (<USD $9). The three girls interviewed sought basic medical treatment. The fourth girl later died of an unknown disease.”

Dujarric said the U.N. was, as of Friday, unable to confirm those specific allegations, but the investigation remains open. Further, according to Code Blue, on Monday, March 28, a mother in another region of the CAR alleged her sixteen-year-old daughter was raped by a peacekeeper. “When police questioned the accused in the presence of his UN military commander,” Code Blue wrote, “the soldier confirmed that he ‘had sexual intercourse’ with the victim several times, and paid her between 2000 and 3000 Central African Francs.” That alleged incident is also under investigation.

Bolstering the new allegations, according to U.N. spokesperson Stephane Dujarric, “Burundian peacekeepers had been accused of raping a 14-year-old girl earlier this month, while a Moroccan soldier had been accused of engaging in an exploitative sexual relationship with a woman in February,” Reuters reported.

“The UN investigation into these sickening allegations, which suggest sexual abuse and exploitation of a large number of women and girls, must leave no stone unturned,” U.N. High Commissioner for Human Rights Zeid Ra’ad Al Hussein said. “We are taking these allegations – some of which are particularly odious – extremely seriously. It is vital that the victims are protected and receive all necessary care.”

A press release issued by MINUSCA last Friday stated that in addition to U.N. troops, other soldiers, as well as civilians, were accused of committing sexual abuse. All three nations’ whose peacekeepers are accused of abuse — Burundi, Gabon, and France — have been notified of the allegations and asked to intervene. The statement quoted U.N. Secretary-General Ban Ki-moon, who said “the United Nations is shining a spotlight on these despicable, depraved and deeply disturbing allegations. I will continue to be unrelenting in confronting this scourge and raising it proactively at every opportunity.”

According to Code Blue’s report, all of the soldiers accused in the allegations ranging from 2013 to 2015 have returned to their home countries. Ban said, however, that “Burundian and Gabonese units allegedly involved will remain confined in camps during the investigation.”

According to the U.N. press release, “The UN chief stressed that his ‘constant and loud advocacy’ must be matched by the actions of Member States who alone have the power to discipline their forces with consequences. ‘This is essential to restoring trust in the invaluable institution of peacekeeping and – even more importantly – to provide a full measure of justice and healing to the affected communities.’”

“The States to whom these troops belong must do more to stop the abuse happening, to punish those committing these acts with appropriate sentences, and to prevent further violations. Otherwise this awful cycle of abuse will never end.”

In spite of the U.N.’s apparently swift and concerned response, the Washington Post reported in late February that out of 42 official registered incidents on file with the U.N., only one resulted in charges against accused peacekeepers. In February, a U.N. official was fired for failing to respond adequately to allegations of abuse, though as many as 1,000 peacekeepers have been expelled from units with soldiers accused of assault, showing action on the part of authorities. The Post added, however, that the number of victims may be higher than the U.N. admits. Victims also include children, who have also reportedly been subjected to sexual abuse.

As Hillary Margolis, a women’s rights researcher at Human Rights Watch said last month of other sexual assault allegations against peacekeepers in the CAR:

“In a country where armed groups routinely prey on civilians, peacekeepers should be protectors, not predators. Sending peacekeepers back home is not enough. The U.N. needs to insist that troops’ home countries bring rapist and other abusers to justice, and that survivors get the support they need.”