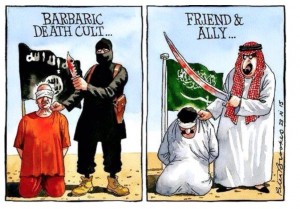 Over the weekend, I published a post titled Al Jazeeza Presenter to Saudi Ambassador – “Why Support Democracy in Syria but Not Saudi Arabia?” in which the Saudi Ambassador claimed subjects of Saudi Arabia don’t want or need elections because they are so enamored with the absolute monarchy’s management of society. Yes, and I just had lunch with the Easter Bunny.

Here’s the clip if you missed it:

I asked the Saudi ambassador to the UN why he supports democracy in Syria but not in Saudi Arabia – @AJUpFront clip:https://t.co/bblCAHCdZS

Not that you need additional evidence demonstrating the ridiculousness of his answer, but I’ll provide some anyway. Reuters reports:

Saudi Arabia has sentenced a journalist to five years in jail for insulting the kingdom’s rulers and “inciting public opinion” on Twitter, Amnesty International said.

Amnesty described the sentencing of Alaa Brinji on Thursday as “a clear violation of international law” and said it showed intolerance of the right to peaceful expression.

Officials at Saudi Arabia’s Justice Ministry could not be reached for comment over the weekend.

Against the background of regional turmoil, the ultra conservative Sunni Muslim country has issued tougher penalties against all forms of dissent.

The sentencing against Brinji, who worked for Saudi Arabian newspapers al-Bilad, Okaz and al-Sharq, came after a guilty verdict on March 24, Amnesty said.

Brinji was arrested in May 2014 and has been in detention since, according to Amnesty. He had also been accused of apostasy – abandoning his Muslim faith – a crime which carries the death penalty but was not convicted of this due to a lack of evidence, Amnesty said.

In February a Saudi court commuted the death sentence against a Palestinian poet convicted of apostasy, to eight years’ jail and 800 lashes, according to his lawyer.

In 2014, a Saudi court in Riyadh sentenced three lawyers to up to eight years in jail after they criticized the Justice Ministry on Twitter.

Of course, this is just the tip of the iceberg when it comes to the barbarism of the Saudi royal family.