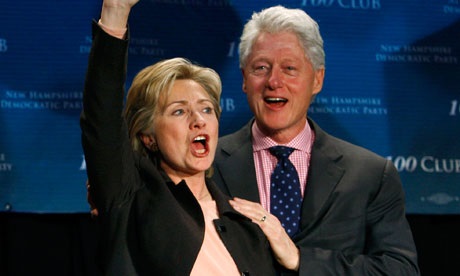 – With Hillary Clinton’s Email Lies Unravelling, 147 FBI Agents Are On Her Heels:

Earlier this month, conservative legal advocacy group Judicial Watch released a series of documents obtained via an FOIA request which appear to prove that Hillary Clinton knew her BlackBerry wasn’t secure when she and her staff moved into Mahogany Row (the nickname given to the set of offices reserved for senior officials in the Department of State).

E-mail exchanges between Senior Coordinator for Security Infrastructure Donald Reid and the NSA show Clinton was intent on obtaining a secure BlackBerry that she could use in restricted areas.

Although Clinton would of course be given a desktop computer on which she could safely conduct state business, Reid said the Secretary had become “addicted” to her BlackBerry during her ill-fated 2008 Presidential campaign. “The issue here is one of personal comfort,” an e-mail from Reid reads. “S [Secretary Clinton] does not use a personal computer so our view of someone wedded to their email (why doesn’t she use her desktop when in SCIF?) doesn’t fit this scenario … during the campaign she was urged to keep in contact with thousands via a BB … once she got the hang of it she was hooked … now everyday [sic], she feels hamstrung because she has to lock her BB up.”

When the NSA wasn’t receptive, long-time Clinton aid and BlackRock crony Cheryl Mills tried her hand at convincing security officials to find a work around for Clinton’s BlackBerry but she too was rebuffed. “The department’s designated NSA liaison, whose name was redacted from the documents, expressed concerns about security vulnerabilities inherent with using BlackBerry devices for secure communications or in secure areas,” AP recounts, adding that “Clinton began sending work-related emails through private accounts soon after, in March 2009.”

Or so the story goes. In fact, however, Clinton may have begun using the private server housed in her basement before March. And while there’s some ambiguity, that would seem to contradict statements she made under oath.

“Conservative legal watchdogs have discovered new emails from Hillary Clinton’s private email server dating back to the first days of her tenure as secretary of State,” The Hill reports, referencing newly released messages turned up by Judicial Watch. “The previously undisclosed February 2009 emails between Clinton from her then-chief of staff, Cheryl Mills, raise new questions about the scope of emails from Clinton’s early days in office that were not handed over to the State Department for recordkeeping and may have been lost entirely.” Here, for instance, is a message dated February 13 that appears to reference the meeting Mills had with the NSA: 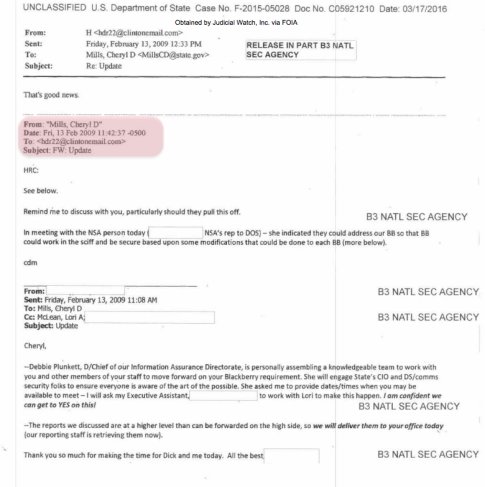 Just to clarify, this is a problem because Clinton’s campaign has contended that she did not use the personal account prior to March and the publicly released e-mails begin on March 18.

Again, there’s some ambiguity here. “[Clinton] has previously acknowledged that she emailed with department officials before March 18, 2009, the date of the first email in the collection that former Secretary Clinton provided to the Department in December 2014,” a State Department official said last week. “Former Secretary Clinton has also indicated that she does not have access to work-related emails beyond those she turned over to the Department.”

So essentially, the argument is that although there were indeed work related e-mails sent prior to March 18, Clinton could not access them to turn them over – or something. The story keeps changing. And indeed that’s the whole problem. At this point it’s abundantly clear that Clinton would have been far better off telling the truth from the very beginning and the fact that incremental information continues to surface certainly seems to suggest that the former First Lady fully intends to admit only what someone else can prove. That doesn’t exactly inspire much trust.

“So now we know that, contrary to her statement under oath suggesting otherwise, Hillary Clinton did not turn over all her government emails,” Tom Fitton, the head of Judicial Watch said in a statement. “We also know why Hillary Clinton falsely suggests she didn’t use clintonemail.com account prior to March, 18, 2009 — because she didn’t want Americans to know about her February 13, 2009, email that shows that she knew her Blackberry and email use was not secure.”

While we would note that there’s a bit of confirmation bias going on there (i.e. Fitton said the messages he uncovered earlier this month were proof that Clinton knew her BlackBerry wasn’t secure and now he says the new e-mails are proof that that proof was indeed proof), Fitton is probably right. Clinton most likely would rather not have been forced to admit that she and Cheryl Mills essentially tried to browbeat the NSA into figuring out how to accommodate the BlackBerrys because the very fact that they had the conversation in the first place suggests Clinton and Mills knew the devices weren’t secure.

But more importantly, it seems exceedingly unlikely that Clinton couldn’t have turned over the messages from February had she wanted to. That is, how is it that she had access to mail on her private sever from March 18 but not from the beginning of February? Did she permanently delete the messages? And if so, why?

Well the FBI intends to find out, because as a new Washington Post piece (which you’re encouraged to read in its entirety) details, the Bureau now has 147 agents on the case. “One hundred forty-seven FBI agents have been deployed to run down leads” WaPo writes, adding that “the FBI has accelerated the investigation because officials want to avoid the possibility of announcing any action too close to the election.”

While we can always hold out some hope that Clinton will one day be held accountable and that someone, somewhere will dispel with the notion that America’s political aristocracy is above the law, we can’t help but suspect that we’ll never see Hillary Clinton in black and white stripes – unless it’s a pantsuit.