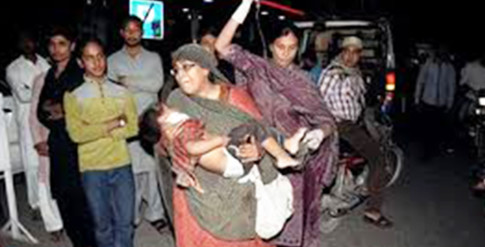 A suicide bomber detonated himself near the children’s swings in a public park in Lahore, Pakistan yesterday, killing at least 70 people and wounding over 300 others. The dead were overwhelmingly women and children.

The park is in an upscale neighborhood in Lahore, near the city’s center, and witnesses say the park was unusually busy because of Easter. A state of emergency was declared in the area, with police sealing it off, and hospitals near the site are crowded with casualties.

The Pakistani Taliban has claimed responsibility for the attack, saying it was intended to target Christians. It is unclear if the people killed were actually Christians, however.

Lahore is the capital of the Punjab Province, which is an important province politically for Prime Minister Sharif and his family. The upscale neighborhood was said to have little security before the attack, and had not been considered a target in the past.