The Department of Defense has admitted to using Predator and Reaper military drones in the US since 2006, according to an internal review. Inspectors for the Pentagon concluded that the missions were few in number and had not violated any laws.

A report by the Pentagon’s Inspector General (IG), dated March 2015, looked at instances when unmanned aerial surveillance (UAS) aircraft – commonly known as drones – have been flown over US territory and found them “fully compliant with laws, regulations and national policies for UAS support to domestic civil authorities.” It was made public on Wednesday, following a Freedom of Information Act (FOIA) request by the newspaper USA Today.

“We found no evidence that any DoD entity using UAS… in support of domestic civil authorities to date has violated or is not in compliance with all statutory, policy or intelligence oversight requirements,” says the report signed by Anthony C. Thomas, Deputy IG for Intelligence and Special Program Assessments.

Fewer than 20 missions involving spy drones deployed over US territory have occurred between 2006 and 2015, the report says.

Drones were used inside the US only in a very few cases, such as to help put out forest fires and stem floods, one Defense Department official told Fox News.

“We felt like we could help,” said the official, who remained anonymous.  “We were supporting first responders.” 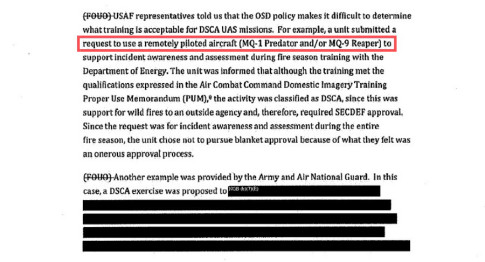 “Great care is taken by DoD personnel to protect the American public’s civil liberties and privacy rights,” the IG report said, adding that the drones were not used “any differently from manned platforms with similar capabilities.”

The use of spy drones was first hinted at in 2013 when, in testifying before Congress, then-FBI director Robert Mueller stated that the bureau employed spy drones in a “very, very minimal way, very seldom,” USA Today noted.

Even for supposedly humanitarian or law enforcement missions, some Americans may be rattled to hear that MQ-1 Predator and MQ-9 Reaper drones have been flying over US territory, as they are notorious for carrying out “targeted killings” on individuals and groups designated as enemies by Presidents Bush and Obama.

The government, however, says these domestic drone flights did not violate any laws.

“There are no federal statutes that specifically address the employment of the capability provided by a DOD UAS if requested by domestic civil authorities,” the report says.

The military has been acting under a policy formulated by the Pentagon in September of 2006, which is based on previous executive orders governing the surveillance of Americans dating back to the 1980s.

In the list of federal laws and statues the report’s authors referenced to justify the drone flights, however, one is conspicuously missing: Title 18 of the US Code, Paragraph 1385, otherwise known as the Posse Comitatus Act.

“Whoever, except in cases and under circumstances expressly authorized by the Constitution or Act of Congress, willfully uses any part of the Army or the Air Force as a posse comitatus or otherwise to execute the laws shall be fined under this title or imprisoned not more than two years, or both,” says the law, last modified in 1994.

#Pentagon…using spy drones over #US.