Six environmental NGOs (Global 2000, PAN Europe, PAN UK, Generations Futures, Nature et Progrès Belgique and Wemove.EU) from five European countries filed Wednesday a formal legal complaint against those responsible for the assessment of glyphosate in Europe, for denying the probable carcinogenic effects of the chemical and getting its European market license renewed. 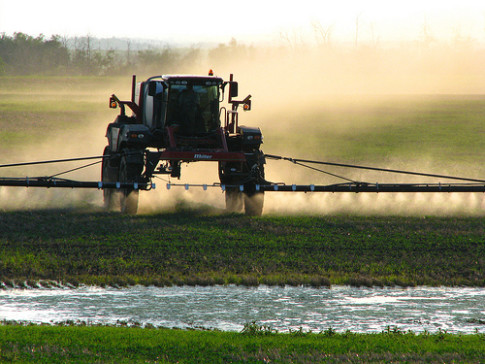 In March 2015, glyphosate was classified by the International Agency for Research on Cancer (IARC) as a probable human carcinogen. But in Europe, the German Federal Institute for Risk Assessment (BfR) – acting as a Rapporteur for the European Commission – and the European Food Safety Authority (EFSA), approved the industry’s application and proposed to classify glyphosate as “non-carcinogenic”. The 2009 EU pesticides law (1107/2009) forbids active substances which can cause cancer from being used as pesticides but now the green light has been given for glyphosate’s re-approval in Europe.

On 7 March the Standing Committee on Plant Animal Food and Feed will re-evaluate the authorization of glyphosate for another 15 years and it seems that Member States are likely to vote in favor.

Glyphosate-based products are the world’s most widely used weedkillers, used not only in the production of our food but also in public areas such as public gardens, parks and cemeteries. It’s not surprising that residues of this dangerous pesticide can be found in the environment, in food and in our bodies, while recently, glyphosate residues were detected in German beer.

The NGOs’ legal complaint, filed in Berlin, brings to the surface some serious violations of the statutory regulations and scientific standards which were used to deny the carcinogenicity of glyphosate, and requests the relevant state attorneys to investigate further.

In its assessment, the German BfR initially relied completely on the carcinogenicity data and statistical evaluation provided by Glyphosate Task Force (GFT). But after WHO classified glyphosate as a “probable human carcinogen”, BfR found statistically significant tumor incidence in five mice studies provided by the industry, using a different statistical test (the “trend test”).[3]

However, in a blatant violation of OECD guidelines and basic scientific principles, first BfR and then EFSA discarded these findings as irrelevant to exposure.

“When we looked into how the BfR and EFSA on one side and the experts of the World Health Organisation on the other could reach opposite conclusions after revising the same animal studies, we were stunned by what we found” says Angeliki Lysimachou of Pesticide Action Network Europe.

“It is hard to understand how the BfR can simply adopt the claims from Monsanto. Monsanto had already been in conflict with the law and it is not the first time that they gave incorrect infomration about glyphosate”, says Josef Unterweger, the lawyer who pressed charges against Monsanto, BfR and EFSA on behalf of the NGOs.

“The flaws in the glyphosate risk assessment are unacceptable, unlawful, and dangerous. Thus we urge European member states to reject the re-approval of glyphosate on 7 March and take a stand to protect human health and the environment,” says Angeliki Lysimachou.