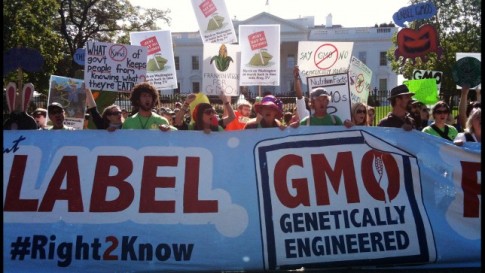 The senators’ legislation presents an alternative to a Senate Agriculture Committee bill that would hide ingredient information from consumers by overturning state GMO labeling laws.

“Rather than blocking consumers’ access to information they want, the U.S. Senate should move forward with a solution that works for businesses and consumers alike,” said Merkley. “There is a way to give consumers the information they are asking for without placing unfair or conflicting requirements on food producers. This legislation provides the common-sense pathway forward.”

“This bill is an important step forward to give consumers a uniform national mandatory label, and it seeks to address the needs of food producers by giving them a suite of options to comply with a mandatory national label,” said Leahy. “I believe that until a national mandatory label like this is enacted, Congress should not preempt state laws, like Vermont’s Act 120.”

“American consumers have been asking for this information and this bill strikes a reasonable balance that will deliver it,” said Tester, a farmer from Big Sandy, Montana.  “Transparency in food labeling strengthens our families and communities, and ensures consumers aren’t left in the dark.”

The Biotechnology Food Labeling and Uniformity Act would allow American consumers to see whether a food has been prepared with GM ingredients, while offering food manufacturers several options for including this information on or near the ingredients list. This framework meets the needs of consumers, the vast majority of whom support labeling according to polls, and producers, who worry that a patchwork of state labeling laws would be costly and difficult to comply with and confusing for consumers.

Specifically, the Biotechnology Food Labeling Uniformity Act would amend the Food Drug and Cosmetic Act to require manufacturers to disclose the presence of GM ingredients on the Nutrition Fact Panel in one of four ways:

None of these options would require front panel disclosures or “warning” statements intending to disparage GM ingredients.

Through this proposal, interested consumers have the ability to find clear information about GM ingredients written directly on the product label when making food purchasing decisions, and food producers have regulatory certainty in complying with a single GMO labeling standard.

“The legislation reflects Campbell’s support for mandatory national standards for labeling of foods made with GMOs,” said Kelly D. Johnston, Vice President of Government Affairs for Campbell Soup Company. “We applaud Senator Jeff Merkley and his colleagues for responding to consumers’ desire for the information they seek in a consistent and transparent manner.”

“As a businessman, I know the value of transparency and trust. Consumers are demanding the right to know more about their food and how it’s grown, and so far, the response from Congress and many companies has been to keep them in the dark,” said Gary Hirshberg, Chairman of Just Label It and Chairman of Stonyfield Farms. “I believe Senator Merkley’s bill is the kind of proposal that could bridge the divide between consumers and food companies on the issue of GMO labeling. This bill will give consumers the information they want, while allowing manufacturers the flexibility they say they need to implement mandatory, on-package labeling.”

Jean Halloran, director of food policy initiatives for Consumers Union, said, “This is what real disclosure looks like. This bill finds a way to set a national standard and avoid a patchwork of state labeling laws while still giving consumers the information they want and deserve about what’s in their food. This compromise offers food companies different labeling options and ensures that all consumers – no matter where they are in the country or whether they own a smartphone – have the information they overwhelmingly say they want. We urge Senators to support this proposal as they move forward on GMO labeling legislation.”