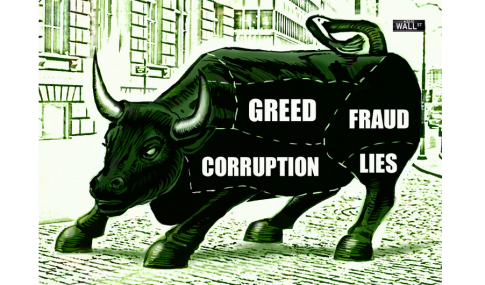 – Morgan Stanley Set To Pay $3.2 Billion For 2008 Financial Collapse, Only 2% Of What They Borrowed:

Morgan Stanley’s settlement for $3.2 billion pales in comparison to what they borrowed.

While some may claim that the settlements made with big banks in recent years are better than nothing or are significant amounts, no matter how much that bank borrowed in 2008-2009, to say that these settlements are minuscule at best is an understatement. Last month, Morgan Stanley, one of the largest investment banks in the world and biggest borrowers in the 2008 financial crisis, agreed to pay $3.2 billion in a settlement with federal authorities.

Although $3.2 billion may seem like a lot of money, and it absolutely is for people not in the investment banking business, let’s compare this settlement to other settlements reached in relation to the crisis. JPMorgan reached a $13 billion settlement, Citigroup reached a $7 billion agreement, and Bank of America agreed to a “historic” settlement of $16.6 billion. Compared to these hefty settlements, $3.2 billion really doesn’t seem like much, especially considering Morgan Stanley borrowed more than almost any other bank during the crisis.

What role did the banks play in the collapse of the housing market and the financial crisis that ensued? They lied and were extremely irresponsible with the mortgage packages they were selling. They would give the loan a high rating of security when it actually had risky factors inside of it and handed them out like candy to people that weren’t likely to be able to pay them back. This is just the tip of the iceberg of the illegal and irresponsible practices Morgan Stanley was involved in, among many other banks, but these practices essentially caused the biggest financial crisis in America since the Great Depression. Why did the banks allow this to happen? Oscar-winning film The Big Short, which details the discovery of the impending economic collapse, suggests that the big banks knew that the government would have to bail them out to protect the country from an even bigger collapse. And bail them out, they did.

In 2008, the Troubled Asset Relief Program (TARP) was founded as a group that would allocate funds to bail out the banks that were failing and essential to the economy. Rather than nationalize the banks in an effort to protect taxpayers, whose money was essentially buying out the banks, the corrupt Federal Reserve gave money to the banks so they could stay afloat and remain independent. The banks wound up receiving about $700 billion as reported by TARP, but this was only a fraction of how much the Federal Reserve spent, lent, or guaranteed, which was estimated to be $7.7 trillion. How big does the $3.2 settlement look now?

1 thought on “Morgan Stanley Set To Pay $3.2 Billion For 2008 Financial Collapse, Only 2% Of What They Borrowed”