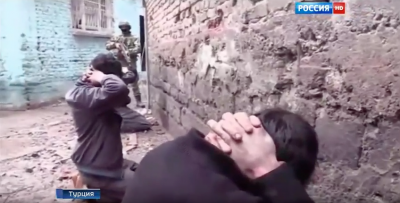 The Turks, members of NATO in “good standing”, are using the opportunity of the war in Syria to finish up the genocide of all ethnic minorities in Turkey which they started with the Greeks and Armenians in the 20th century.

One of the Turks’ favorite pastimes is killing minorities.

In the 19th century Ottoman Turkey reacted brutally to the attempt of Bulgaria to break free of their yoke. And in the early 20th century, millions of Armenians, Greeks, and other minorities were massacred.

In those instances some Europeans protested, but European nations did nothing. (Europe has always supported Turkey in order to “contain” Russia.) Now Turkey seems set to do the same against the Kurdish population in its Southeast, and again the silence from Europe is deafening.

It appears the EU and Turkey have reached a blood bargain – if the Euros look the other way on the Kurdish “problem,” Erdogan will cut refugee flows into Europe.

Below is a report from Russian TV about the “anti-terror” operation going on in Turkey against the Kurds – whose militia is in fact one of the strongest forces opposing the savage terrorists of ISIS. Turkey’s support for ISIS has been well established.

Tatiana Zdanok is a member of the European Parliament from Latvia best known for her fight for equal rights for ethnic and non-ethnic (Russian speaking) Latvians. With four other MEPs she visited the areas of Turkish Kurdistan where Erdogan is waging a war against people merely for speaking a different language.

Erdogan seems to be copying the strategy of his new allies the genocidal Banderist Ukrainian regime, by waging a campaign of annihilation against his own citizens. Just label women and children as “terrorists,” then bombard them out of existence.

Ms Zhdanok additionally shared her impressions with the Russian language Latvian newspaper Vesti. Amazingly, the story was marked “Advertising”, which is why we cannot provide a link. In the EU, this visit was not covered at all. Here is an excerpt:

— What is the strongest impression you got from the trip  to Kurdistan?

— It was not the sound of gunfire nor the iron fences, or even the smoke rising over the bombed out blocks…As we were saying goodbye to the Kurdish activists and leaders, we were informed of the Turkish ultimatum: the Kurds had to surrender or be bombed. By the time this interview is published, some of our companions may have been killed in this civil war in eastern Turkey.

In the capital of Turkish Kurdistan –Diyarbakır  – there is an old section called Sur. It is surrounded by a fence and under curfew, with Turkish artillery ‘working’ along the perimeter. The Deputy Mayor of Dzhizra, Leila Imret, managed to get out to meet with us, with special permission from the military besieging the city. She had not been out for three months. The city is in ruins and people hide in their basements. Leila gave us a list of 167 civilians killed.

Most places in Turkish Kurdistan look surreal: there are metal fences, armed soldiers against a background of huge posters depicting Turkey’s leaders – Erdogan and Davutoglu.  Apparently the mixture of the bombardment and the portraits are expected to promote love of the government among Kurds…

—What can and should the European Parliament do to achieve peace in Turkish Kurdistan?

—The situation drastically worsened last fall when EU leaders exchanged 3 billion euros in financial assistance in return for Turkey halting the flow of refugees to Europe. In addition to the money, they apparently promised Turkey not to interfere in the Kurdish issue. We strongly disagree with this deal. Turkey depends on Europe, and the EU should take advantage of this to put to an end the bloodshed and force the Turkish ruling party and Kurdish politicians to negotiate.