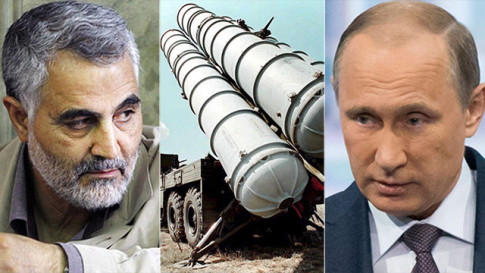 – Russia “Confirms” It Has Plans To Restore Assad Government In Syria:

Watching the US attempt to explain to the public why Washington can’t join the Russians in targeting extremists in Syria has been entertainment gold. The fundamental PR problem revolves around the fact that the West has gone out of its way to hold up ISIS as the quintessential example of pure, unadulterated evil that must be eradicated at all costs and yet when Moscow began bombing ISIS targets and publicly implored the US to join in, Washington said no.

If you’re the public that seems strange. To be sure, everyday Westerners are accustomed to Russophobic propaganda in the news and in cinema and the public is thoroughly conditioned to think of The Kremlin as a weird, multi-colored palace complex staffed with hundreds of James Bond villains in a country where it’s always dark, and always snowing. That said, Western leaders have had a difficult time explaining why that’s somehow worse than ISIS, whose slickly-produced videos have so far depicted a series of beheadings, a Jordanian pilot being burned alive, “spies” being drowned in a cage, and four men being packed into a Toyota Corolla which is then destroyed at close range by a rocket launcher.

The answer, of course, is that ISIS and the various other extremist groups battling for control of Syria have almost all received training and funding from the US and its regional allies at one point or another and at the end of the day, destroying ISIS nets nothing for Washington in terms of geopolitics. In fact, were the group to go the way of the dinosaurs, it would help to restore the Assad regime which is the worst possible outcome in the eyes of the US, Saudi Arabia, and Qatar.

In short: from a geopolitical perspective, deterring Assad, Russia, and Iran is much more important than fighting any ragtag band of extremists, but that’s a tough sell to a public that’s grown weary of watching Westerners having their heads chopped off on the nightly news.

Moscow’s position is simple. The Russians are in Syria to restore Assad which means waging war on his enemies and because some of his enemies are terrorists, that means Russia is at war with terror. Putin has made no secret of this, but the US has been forced to act as though he has because without the whole “we can’t be sure what his aims are” line, an impatient public might start to demand answers as to why Washington is so obstinate when it comes to cooperation on anti-terror ops.

The Kremlin’s real goal is to help Syrian President Bashar al-Assad retake as much as possible of the territory his forces have lost to opponents, including U.S.-backed rebels, Russian officials told Bloomberg News. Moscow’s deployment of several dozen planes, as well as ships in the Black and Caspian Seas, could last a year or more, one official said.

President Vladimir Putin is willing to run the risk of falling into the kind of quagmire that helped sink the Soviet Union a generation ago for the chance to roll back U.S. influence and demonstrate he can dictate terms to Washington. If the strategy is successful, Russia’s largest military drive in decades outside the former Soviet Union would force the

U.S. and its allies to choose between Assad, whom they oppose for his human-rights abuses, and the brutal extremists of Islamic State.

A top Russian military official said on Friday that the Kremlin sees no moderate opposition in Syria, leaving only terrorists and the pro-Assad forces Moscow is backing.

“In the West, they talk about ‘moderate opposition,’ but we so far haven’t seen any in Syria,” General Andrey Kartapolov, commander of the Russian operation in Syria, told the Komsomolskaya Pravda newspaper.

“Any person who takes up arms and fights the legal authorities, how moderate can he be?”

Moscow’s campaign is designed to initially rout the groups that have threatened Assad’s control over key cities in western Syria, both radical Islamists and the so-called moderate rebels backed by the U.S. and its allies. Later there will be a broader offensive against Islamic State in the north and east of the country, say officials, speaking on condition of anonymity to discuss confidential matters.

And that, you’ll note, is precisely what we said last week. To wit: “Hezbollah and Iranian troops are advancing on Aleppo and Moscow is backing the offensive from the sky which means that the hodgepodge of anti-regime forces that control Syria’s largest city will almost (and we say “almost” because there are no sure things in war) certainly be routed in a matter of weeks if not days, which would effectively serve to restore the Assad regime in Syria. After that, the Russian bear and Qasem Soleimani will turn their eyes to the East of the country and at that point, it is game over for ISIS.”

One more time, back to Bloomberg:

Putin believes that Assad, whose forces currently control a quarter of Syrian territory with 60 percent of the population, must be reinforced to ensure that Russia can exert a dominant role in negotiations on a political settlement in Syria, according to people who attended a private meeting with the Russian leader early this month.

Russian officials say they expected a cold reception from the U.S. and its allies. Putin is using personal diplomacy — a string of private meetings with top leaders and officials from other capitals — to make his case quietly. Initial indications are that the diplomatic drive has been having some success, with several countries agreeing to military talks to reduce the risks of inadvertent conflict.

Kerry said on Monday he expects to begin talks in the next few days with officials from Turkey, Russia, Saudi Arabia and Jordan on restarting efforts to negotiate a political settlement in Syria. The U.S., Russia and Saudi foreign ministers may meet in Vienna soon, Interfax reported.

“Even if there isn’t a radical improvement in the regime’s military fortunes, which is unlikely, at the very least the aim is to consolidate its military and territorial positions to remove the question of Assad’s departure as a precondition for a political settlement,” said Mikhail Barabanov, a senior researcher at the Moscow-based Center for Analysis of Strategies and Technologies, which advises the Defense Ministry.

So this is being pitched as some kind of secret that needed to be confirmed by speaking to Russian “officials” with “knowledge of the matter.”

As we’ve said on dozens of occasions, there was never any ambiguity here. Moscow never hid the fact that it intended to prop up the Assad regime. The simple fact is that some of Assad’s enemies happen to be terrorists and so, as mentioned above, Russia is fighting a war on terror by default. It just so happens that the West and its Sunni allies are the ones who have trained and armed the terrorists so any move to coordinate with the Russians would mean having to actually make a real effort to rout the very same groups Washington armed on the way to restoring the very same regime the US and others sought to destabilize in the first place. In order to avoid that rather inconvenient outcome, the US simply went the obfuscation rout by (ironically) claiming that Russia was obfuscating.

Of course you needn’t have spoken with any Russian officials to uncover this “secret” plan. You could have just listened to Putin’s interview with Charlie Rose which was broadcast on national television: