– Illinois To Delay Pension Payments Amid Budget Woes: “For All Intents And Purposes, We Are Out Of Money Now”:

By now, Illinois’ budget problems are no secret.

Back in May, after the State Supreme Court struck down a pension reform bid, Moody’s move to downgrade the city of Chicago thrust the state’s financial woes into the national spotlight.

Since then, the situation hasn’t gotten any better and despite hiring an “all star” budget guru (for $30,000 a month no less), Bruce Rauner was unable to pass a budget in a timely fashion leading directly to all types of absurdities including everything from the possibility of shortened school years to lottery winners being paid in IOUs.

Now, as Bloomberg reports, pension payments are set to be delayed. Bond payments, apparently, will still be made.

The spending standoff between Republican Governor Bruce Rauner and Democratic legislative leaders has extended into its fourth month with no signs of ending. Munger said her office will postpone a $560 million retirement-fund payment next month, and may make the December contribution late.

“This decision is choosing the least of a number of bad options,” Munger told reporters in Chicago on Wednesday. “For all intents and purposes, we are out of money now.”

Munger said the pension systems will be paid in full by the end of the fiscal year in June. The state still is making bond payments, she said.

“We prioritize the bond payments above everything else,” Munger told reporters.

Illinois Comptroller Leslie Munger said on Wednesday a $560 million November pension payment will be delayed due to a cash crunch stemming from the state’s budget impasse.

Despite the delay, state pension funds will be paid in full by the end of fiscal 2016, Munger said at a news conference in Chicago.

Here’s some color (again via Reuters) from Tuesday’s preview:

Oct 13 Illinois’ budget impasse has reached a point where full and timely payments for big ticket items such as pensions could be in jeopardy, the state comptroller’s office indicated on Tuesday.

Comptroller Leslie Munger set a Wednesday press conference “to discuss the significant cash flow constraints the continuing budget impasse is placing on state finances and the challenges of making timely state payments in the months ahead,” according to an advisory from her office.

The battle between Republican Governor Bruce Rauner and Democrats who control the legislature has left Illinois without a budget for the fiscal year that began July 1. However, the state is required, even without a budget, to put aside money each month for pensions and debt service on bonds.

One wonders what these means for Chicago’s bankrupt school system, which, as we reported early last month, was depending upon nearly a half billion in funding from Springfield to plug a gaping budget hole. Further, this would seem to suggest that anyone who wins more than a few thousand in the Illinois lottery can go ahead and figure on getting a pieces of paper with Bruce Rauner’s picture rather than Ben Franklin’s for the foreseeable future.

We also encourage readers to review this piece by Reuters in full as it contains several of the most egregious examples of government waste and inefficiency you’ll ever come across  and goes on to say that reform simply isn’t an option, as the Illinois legislature is filled with lawmakers who have at one time or another themselves benefited from the state’s sprawling local bureaucracies. Reuters also says it has identified nearly a dozen instances where husbands employ wives, mothers employ daughters, and fathers hire sons,” suggesting nepotism weighs heavily on the already elephantine system.

Bear in mind that this is the same state whose court system refuses to allow efforts at pension reform to move forward, and while all of this may seem like a recipe for default disaster, just remember, PIMCO sees a lot of “long-term value” in Chicago’s debt.

Finally, a look at just how underfunded Illinois’ pension system truly is: 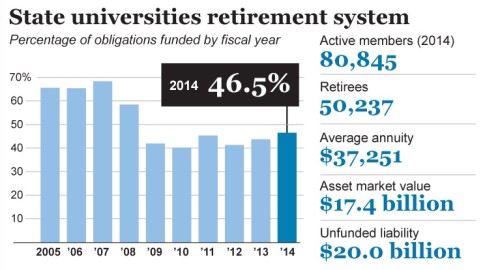 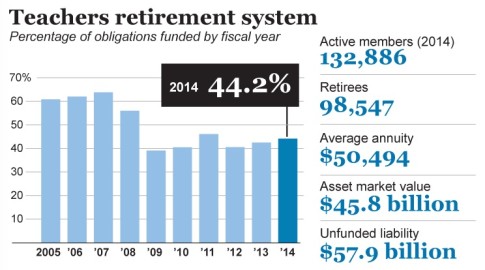 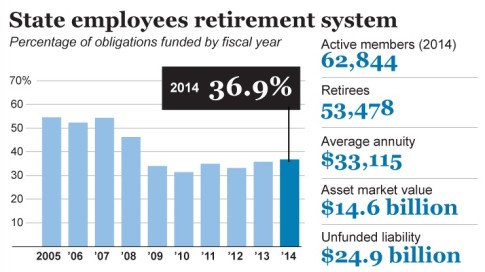