– Russia Sends Its Only Aircraft Carrier To Syria, Signals It Is Just Getting Started:

As should be abundantly clear by now, The Kremlinis adopting a “slightly” different strategy when it comes to combatting terror in the Mid-East than that adopted by the US and its Western and regional allies.

The strategy of the US and its allies seems to go something like this: 1) covertly arm and train groups who you know might ultimately become terrorists because arming and training these groups may be a way to destabilize unfriendly regimes, 2) wait for blowback, 3) launch serious effort to combat terror if unfriendly regime has been “successfully” replaced by puppet government, or launch half-hearted effort to combat terror if situation still fluid and regime still clings to power.

Obviously, that strategy is prone to all types of problems, and sensing that the US and its allies might have finally met their foreign policy blunder Waterloo in Syria, Russia decided to call everyone’s bluff by launching a real war on terror. Of course, this war conveniently restores the regime of one of Moscow’s allies, but in the end the result is the same: anyone who is a terrorist and who is also fighting Assad in Syria is in for big trouble because Russia is using this is as an opportunity to reassert itself on the world stage and also to fire up a long-dormant military juggernaut.

Now, on the heels of hundreds of airstrikes accompanied by dramatic video footage as well as cruise missile attacks launched from Russian warships in the Caspian, The Kremlin is sending its lone heavy aircraft carrier into the fight. This is only the ship’s sixth deployment in history.

“The cruiser dock repair completed until the end of the week go to the coast of Syria, where he joined the operation to destroy the group” Islamic State “,” – a spokesman said.

According to him, from May to August this year was held aircraft carrier dock repair 82 Shipyard in Roslyakovo (Murmansk region). Then, on a regular docked in Murmansk, he walked up to the restoration of full combat readiness.

Since September 30, Russia carries out air operations in Syria with the aim of destroying the objects of the “Islamic state.”

Here are some images: 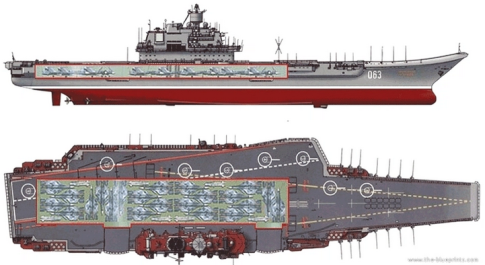 Here’s a bit of color via Reuters from earlier this year. Notably, the Kuznetsov isn’t known for being in particularly great working order which probably makes the chances of some kind of accident that much greater:

When the Soviet Union launched Kuznetsov in 1985, it was a major technical accomplishment for the then-superpower. Moscow began assembling Varyag, a sister ship of Kuznetsov, around the same time. It also started work on a true full-size carrier, as big as anything the United States builds.

But the Soviet Union’s collapse in 1991 abruptly halted the carrier program.

Russia was left with Kuznetsov as its sole flattop and, deprived of funds and Ukraine’s assistance, has struggled to keep the vessel in working condition. Since the ship was commissioned into frontline service in the early 1990s, Kuznetsov has deployed just five times. Each deployment, lasting between three and six months, saw the flattop sail from its home port in northern Russia around Europe and into the Mediterranean as a show of force and to demonstrate support for Russia’s allies in the region, including Syria.

1 thought on “Russia Sends Its Only Aircraft Carrier To Syria, Signals It Is Just Getting Started”