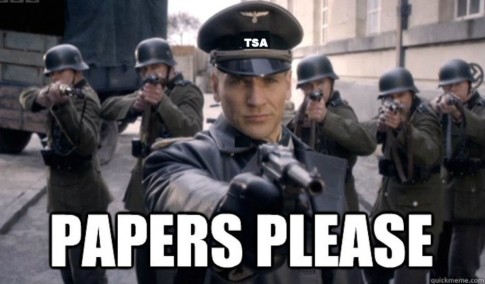 It has been speculated by those who have been researching the ongoing encroachment of the national security state that it would be fully implemented through  a range of restrictions that would make it all but impossible to engage with modern society if one is “non-compliant.”

First off, it’s worth noting that having a driver’s license at all is a restriction on one’s liberty. Nevertheless, for those who have given in to that bit of soft tyranny, it now appears that the standard license is not going to be sufficient to travel as you wish.

New Yorkers looking to board a domestic flight or take a cruise next year could find themselves grounded unless they have driver’s licenses containing additional security data soon to be required by the federal government.

That’s because the state has failed to comply with the minimum standards of the federal Real ID system, according to the U.S. Department of Homeland Security…

The enhancements include essentially turning the driver’s license into a passport even for domestic travel and access to many domestic locations. Naturally, it also is replete with the latest tracking tech.

When originally announced to New Yorkers in 2009 it was intended to “be used instead of a passport to return to the US by land or sea from Canada, Mexico and some countries in the Caribbean.” Now, however, it appears to have expanded to “go on a cruise or to enter most federal buildings.”

The insult added to injury is that it is going to cost significantly more than the standard licensing fees, which has thus far slowed any talk of mandatory adoption by the state of New York. And as an added bonus applicants must show up in person. Emphasis added:

New York’s Department of Motor Vehicles has resisted making everyone get them, because of the additional administrative costs to the state and the 50 percent increase in the license fee for drivers (an enhanced license costs $30 more than a standard license), DMV spokesman Joseph Morrissey said. It also wants to avoid forcing all applicants to make the required in-person applications to obtain the licenses, he said.

This announcement is troubling on more levels than just the enhanced tracking of one’s movements and potential restrictions on one’s innate right to travel freely. It all stems from the federal Real ID Act that was passed in 2005 in the ongoing opportunistic wake of September 11th. The federal guidelines have been adopted by most states, but a few holdouts like New York feel that they are compliant with the federal regulations simply by offering the enhanced IDs as an option to their residents. So far 800,000 New Yorkers have an enhanced ID, but this falls far short of the nearly 12 million active licenses, highlighting just how excited people seem to be about giving up more rights … and paying to do it.

In the end, it might take quite a while for individual state bureaucracies and constitutions to sort this all out. The federal government would like to see full adoption by 2016, but one blogger in Arizona highlights that a law prohibits her state from complying with federal mandates. This appears to be one significant hurdle among many in the attempt at the full usurpation of states rights by the federal government, in addition to the egregious imposition of federal rule in what is a Constitutional Republic comprised of independent and autonomous states filled with supposedly free citizens.

One must wonder, then, what other restrictions will be imposed in the name of national security if this is not fully resisted while still in its early stages?

What is happening with Real ID in your state? Please leave your comments below.