The data point everyone has been waiting on is out and, just as we tipped weeks ago, China liquidated nearly $100 billion in USD assets during the month of August in support of the yuan.

Shortly after the PBoC’s move to devalue the yuan, we noted with some alarm that it looked as though China may have drawn down its reserves by more than $100 billion in the space of just two weeks. That, we went on the point out, would represent a stunning increase over the previous pace of the country’s reserve draw down, which we began documenting months ahead of the devaluation (see here, for instance). We went on to estimate, based on the projected size of the RMB carry trade unwind, how large the FX reserve liquidation might need to be to offset capital outflows and finally, late last week, we suggested that China’s official FX reserve data was set to become the new risk-on/off trigger for nervous, erratic markets. In short, the pace at which Beijing is burning through its USD assets in defense of the yuan has serious implications not only for investors’ collective perception of market stability, but for yields on core paper, for global liquidity, and for US monetary policy.

On Monday we got the official data from China and sure enough, we find out that the PBoC liquidated around $94 billion in reserves during the month of August to $3.557 trillion (the lowest since September 2013)… 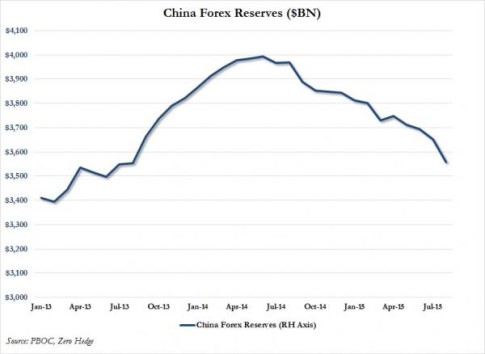 … and as Goldman argues (see below), the “real” figure might have been closer to $115 billion. Whatever the case, it’s a staggering burn rate and needless to say, were the PBoC to continue to liquidate its assets at this pace, it would necessitate a raft of RRR cuts and hundreds of billions in short-term liquidity ops to ensure that money markets don’t seize up in the face of the liquidity drain.

Here’s some commentary from across sellside desks on the official numbers:

Of course the huge draw down was widely anticipated and indeed, we’ve explored and detailed virtually every angle of this story in the lead up to the data. The key takeaway here is that we now have official confirmation that August saw $94 billion in reverse QE (and more likely $115 billion) or, quantitative tightening as Deutsche Bank puts it.

We can, as we explained on Saturday, argue about what the ultimate effect on safe haven assets will be, but what’s not up for debate is that conceptually speaking, China’s massive UST dumping is the opposite of Western central bank QE and as such should be expected to pressure yields. More specifically, Citi has suggested that for every $500 billion in EM FX reserve liquidation, there’s an attendant 108 bps or so of upward pressure on 10Y yields. Similarly, Deutsche Bank, citing the extant literature, flags 50-60bps of upward pressure on 5Y yields for every $100 billion in monthly EM FX reserve liquidations.

The takeaway, as we put it last week, is that if the Fed hikes this month, it will be tightening into a tightening.

But it’s not that simple. It’s also possible that, if China’s FX reserve draw downs do indeed end up serving as a trigger for risk-off behavior (i.e. a selloff in risk assets), the subsequent flight to safety could end up driving yields on long bonds lower, not higher. We discussed this in detail over the weekend.

Still, China isn’t the only country liquidating its USD assets. When you consider that global EM FX reserves amount to more than $7 trillion, it seems reasonable to ask whether the flight to safety that would invariably accompany a worldwide selloff in risk assets would be sufficient to replace the lost bid from massive reserve draw downs. Or, as we put it on Saturday, “the real question is what would everyone else do. If the other EMs join China in liquidating the combined $7.5 trillion in FX reserves (i.e., mostly US Trasurys but also those of Europe and Japan) shown below into an illiquid Treasury bond market where central banks already hold 30% or more of all 10 Year equivalents (the BOJ will own 60% by 2018), then it is debatable whether the mere outflow from stocks into bonds will offset the rate carnage.”

And that consideration, in turn, puts the Fed in a very, very difficult spot. A rate hike cycle will put further pressure on already beleaguered EM currencies which raises the possibility that the FX reserve liquidation will be larger than the eventual safe haven flows and besides, there’s bound to be a lag between the liquidation of USD assets and the flight to safety and given the potential for extraordinary bouts of volatility in UST, JGB, and German Bund markets, it’s anyone’s guess what happens in between.

Whatever the case, something will have to give here. That is, all of these dynamics (i.e. a Fed hike, China’s massive UST dumping, an EM meltdown precipitating FX reserve drawdowns, illiquid markets for the same assets everyone is dumping, hemorrhaging petrostate budgets, etc.) simply cannot coexist for long without something snapping because, as we put it last week, in this very unstable arrangement, the smallest policy error will reverberate exponentially, and those reverberations can lead to only one thing: the Fed’s admission of policy failure by adopting a tightening bias, and ultimately launching another phase of monetary easing, be it QE4 or perhaps even the long-overdue and much anticipated Friedmanesque “helicopter money” episode.