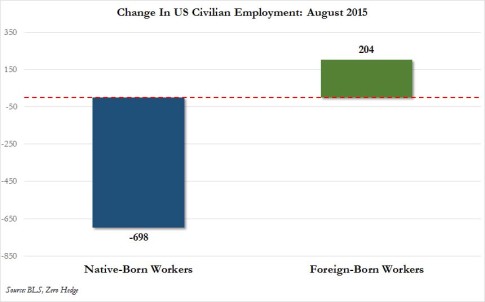 – 698K Native-Born Americans Lost Their Job In August: Why This Suddenly Is The Most Important Jobs Chart (ZeroHedge, Sep 7, 2015):

After the Fed admitted over a year ago that the US unemployment rate (which in 2012 was supposed to be a rate hike “threshold” once it hit 6.5% and is now at 5.1%) has become irrelevant in a country where a record 94 million people have left the labor force, and with the Fed poised to hike rates even though US hourly wages have not only not increased for the past 7 years, but for the vast majority of the labor force continue to decline, some have asked – is there any labor-related chart that matters any more?

The answer: a resounding yes, only it is none of the conventional charts that algos and sometimes humans look at.

The one chart that matters more than ever,has little to nothing to do with the Fed’s monetary policy, but everything to do with the November 2016 presidential elections in which the topic of immigration, both legal and illegal, is shaping up to be the most rancorous, contentious and divisive.

The chart is the following, showing the cumulative addition of foreign-born and native-born workers added to US payrolls according to the BLS since December 2007, i.e., since the start of the recession/Second Great Depression. 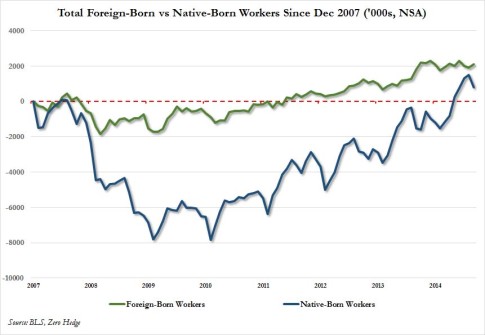 The chart is especially important because what it shows for just the month of August will be enough to provide the Trump – and every other – campaign with enough soundbites and pivot points to last it for weeks on end: namely, that in August a whopping 698,000 native-born Americans lost their job. This drop was offset by 204,000 foreign-born Americans, who got a job in the month of August.

But the punchline: since December 2007, according to the Household Survey, only 790,000 native born American jobs have been added. Contrast that with the 2.1 million foreign-born Americans who have found a job over the same time period… 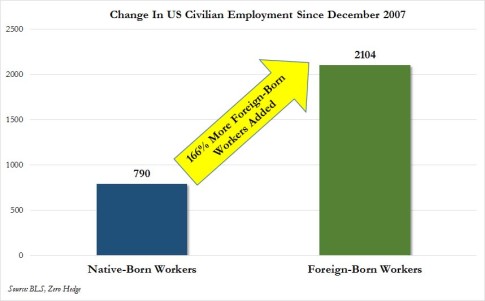 … and you have a combustible mess that will lead to serious fireworks during the next GOP primary.

1 thought on “698,000 Native-Born Americans Lost Their Job In August: Why This Suddenly Is The Most Important Jobs Chart”