On Monday, Turkey’s lira plunged to new lows against the dollar as coalition talks between prime minister and AK Party leader Ahmet Davutoglu and nationalist MHP leader Devlet Bahceli broke down. The result, AKP won’t be able to form a coalition government after elections in June saw the party lose its parliamentary majority for the first time in 12 years.

In the absence of a coalition, the country will go back to the polls – likely in November – where President Recep Tayyip Erdogan hopes heightened violence between Ankara and the PKK will translate into a stronger showing for AKP.

The political turmoil, rising violence, and general EM malaise have hit the country’s currency hard and on Tuesday, Turkey’s central bank left rates unchanged prompting further weakness in the lira which had already fallen earlier in the session after Emine Nur Gunay, Davutoglu’s chief adviser, hinted that a rate hike was not in the cards. 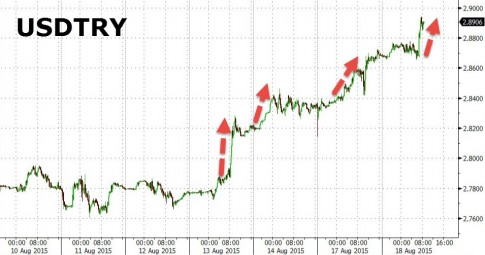 Meanwhile, 10-year yields have spiked to their highest levels in nearly a year and a half. 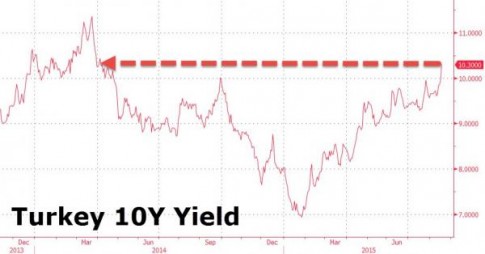 As Bloomberg reports, the market is also not impressed with the central bank’s plan to stabilize markets in the face of policy normalization in the US:

Central bank is “just trying to justify saying to the markets that it’s ready to face a Fed rate hike, without really announcing anything new”

In our view, the so-called road map lacks specificity, a well-defined timetable and analytical discussion. Specifically, the document indicates that: (i) rate corridor will be made more symmetric around one-week repo interest rate and the width of the corridor will be narrowed; (ii) quotation on the interest rate on borrowing facilities provided for PDs via repo transactions will be terminated; and (iii) collateral conditions will be simplified. The rest of the document by and large includes tweaking of the previously implemented measures.

Although the CBT’s signal for normalization is encouraging, we are inclined to believe that the Bank doesn’t have the luxury to carry out a gradual experiment under current circumstances. As a result, we believe that the market will probably force the CBT to normalize and tighten its policy stance in an abrupt manner at some point, á la January 2014

And finally, a bit more on the implications of the stalled coalition talks from Deutsche Bank:

AKP’s coalition talks with MHP and CHP fail; early election is only option left: Although some were still hoping for a last-minute deal between AKP (AK Party) and MHP (Nationalist Movement Party) yesterday and a constructive statement by AKP’s Faruk Celik (that PM Ahmet Davutoglu would deliver a very nice statement) straight after the meeting created some excitement in the markets, MHP leader Devlet Bahceli said no to: 1) a coalition government with a pre-set date for (early) elections; 2) a short-lived AKP-led minority government to take Turkey to a snap election; and 3) any support for a petition for early elections initiated by AKP in the Plenary. Mr. Davutoglu said he will now hold consultation meetings with his party management and President Erdogan, and could subsequently decide to give the government-formation job back to Erdogan. Under the circumstances, the only option left on the table is an early election initiated by President Erdogan directly on 24 August, i.e. swiftly after the 23 August deadline. According to the Constitution, the likely date is 22 November