“The Goldman blowback is a particularly challenging subject to understand and analyze. Taken to extremes, criticism of the firm, which was founded and built by Jewish Americans, smacks at times of anti-Semitism. Fed officials don’t want to fall into the trap of ostracizing qualified people merely because of their association with the firm or its Jewish roots.” 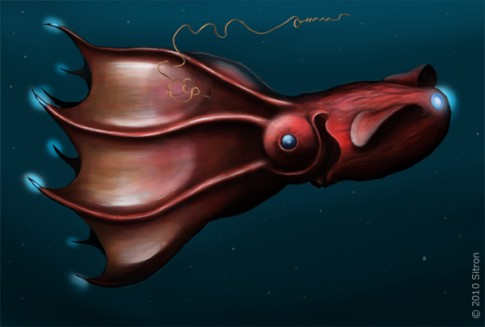 Yesterday, in the aftermath of the Dallas Fed’s grotesque hire of a former Goldman banker, Robert Kaplan (while former Dallas Fed president Dick Fisher is now collecting a sallary from Barclays, where he is now a “Senior Advisor“) even some “very serious people” employed by the WSJ were shocked by this blatant flaunting of central bank capture by Goldman Sachs: consider that in addition to all the other global power posts currently held by Goldman alumni, three of the Fed’s 12 presidents are now Goldman Sachs alumni.

As a further reminder, it is not just the Fed – the Goldman alumni network has quietly, and not so quietly, over the past few years taken over Europe as well: 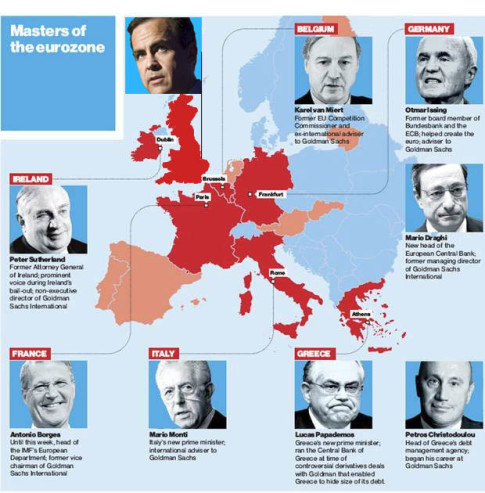 Today, perhaps to diffuse the situation with one of the WSJ’s best Street relationships, none other than Fed mouthpiece and author of the infamous “why are you so stingy, US consumer?” letter, Jon Hilsenrath, decided to “go there” in a piece titled “Dallas Fed Gets a Non-Economist with a Controversial Resume.”

Here is an excerpt of what he said. First, the facts: “Goldman is an object of particular animus among some Fed critics, who see the Wall Street bank as having an unusual hold on government. A long list of former Goldman executives have indeed cycled through the Fed, the government and global central banks more broadly. The list includes Hank Paulson, the former U.S. Treasury Secretary, Mario Draghi, the current head of the European Central Bank, and William Dudley, the head of the New York Fed.”

That much is undisputed. It is what Hilsenrath does next that left us and anyone else who read it stunned, when he ever so gently pivots the narrative so that any critique of Goldman Sachs immediately construed as, drumroll, anti-semitism.

The Goldman blowback is a particularly challenging subject to understand and analyze. Taken to extremes, criticism of the firm, which was founded and built by Jewish Americans, smacks at times of anti-Semitism.

Hilsenrath links to a piece that references the infamous Matt Taibbi Rolling Stone article denouncing the “Great Vampire squid”, whereby even more “anti-semitic” strawmen accusations are lobbed at random in hopes something sticks

Then there is this oft-quoted passage at the beginning of a lengthy rant against Goldman Sachs by Matt Taibbi last July in Rolling Stone: “The world’s most powerful investment bank is a great vampire squid wrapped around the face of humanity, relentlessly jamming its blood funnel into anything that smells like money.” This sentence, many have charged, goes beyond stereotypes about Jews and money, touches other classic anti-Semitic themes about Jews as foreign or inhuman elements poisoning humanity and society, and–to some critics– even seems to reference the notorious “blood libel” that Jews use the blood of Christian babies to make matzoh.

Taibbi claims to have been utterly blindsided by accusations that his article was anti-Semitic. He says he finds the idea “ludicrous.” He denies any relation between his words and classic anti-Semitic stereotypes. His critics find this impossible to believe. Could such a sophisticated writer (the article skewers Goldman with great skill and style) actually not know about the stereotypes and ancient lies that this passage echoes, and could he actually be surprised that there would be people calling his article, fairly or otherwise, anti-semitic? It may be possible to call Goldman Sachs a bloodsucker without being an anti-Semite. But is it possible to call Goldman Sachs a bloodsucker and then be surprised when you’re called an anti-Semite?

And so we come full circle: just like over the past 7 years, much of the factually-based criticism leveled at Obama was relegated to tthe “racist” rantings of a vast “right wing conspiracy”, so finally Wall Street has come out with perhaps the final strawman in defense of the banking profession: any criticism of Goldman is to be henceforth perceived as having veiled (or not so veiled, because how could someone calling Goldman a blooduscker not possibly realize they were referencing Jews, or so the tortured logic goes) anti-semitic undertones. We can only assume the cephalopod anti-defamantion league had no bone in this particular hunt, or else Taibbi would be branded with hate speech against molluscs too.

This, of course, merely serves to mask and ignore the factual accusations that are leveled at Goldman the organization, or at Goldman employees, the criminals, not at Goldman’s managers, shareholders or employees, who may or may not be Jewish extraction. Just like with the Obama criticism which may or may not be racist slander, but just in case it is, think twice before criticizing.

Hilsenrath continues: “Fed officials don’t want to fall into the trap of ostracizing qualified people merely because of their association with the firm or its Jewish roots.”

There is little to respond to this suffice to ask if Hilsenrath has done a statistical sampling of Fed employees to see if there is an over or under representation of people with “Jewish roots” at the Fed relative to what one would expect based on a random population sample. The truth is that if logic and math are applied, there is absolutely no fear that the Fed will ever ostracize Jews (or Goldman alumni). Quite the opposite.

The irony is that after detouring into this subject, Hilsenrath promptly admits that critisim of Goldman’s infestation of the Fed is actually quite valid:

Still, the Dallas Fed hasn’t made it any easier for the central bank to prove to an often skeptical public that it is truly independent of Wall Street and the banks it oversees.

… however by this point, any rational debate has been promptly hijacked by a basal approach that has nothing to do with the matter at hand, and everything to do with being “anti-semitic”… or “racist.”

We won’t go into detail to explain how criticism of Goldman stands on its own, factual feet without bringing up race or ethnicity: we have criticized the bank’s practices for over 6 years, in thousands of factually-backed posts, without once referencing the ethnicity of anyone at the company.

However, now that the “anti-semitic” cat is, so to say, out of the bag, we wonder just how much longer we will have this liberty?

After all, what is there to prevent the US thought police, with or without drone support, to come in and make any “anti-semitic” rants aimed at Goldman, in the indisputable opinion of some secret court, equivalent to hate speech?

And how soon until anyone who dares to criticize either Goldman Sachs or the Fed, is branded a hatemonger, and deemed a terrorist who deserves to not only be shut down but quietly disappeared?

Somehow we have a sinking feeling we will all find out before the next and final market crash is finally upon us.

4 thoughts on “No Jon Hilsenrath, It Is Not “Anti-Semitic” To Criticize Goldman Sachs”