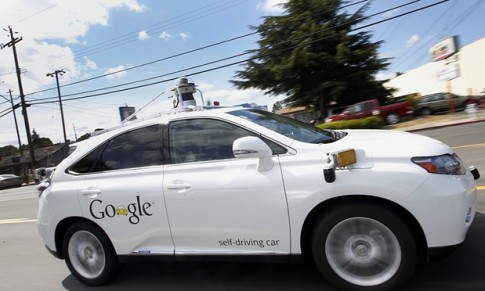 In this 13 May 2015 photo, Google’s self-driving Lexus car drives along street during a demonstration at Google campus in Mountain View, California. Photograph: Tony Avelar/AP

Google has set up its own car company. The tech giant has flirted with major car firms as it explores driverless cars but has also quietly set up its own auto company, according to documents obtained by the Guardian.

Google Auto LLC is headed by Chris Urmson, project lead for Google’s self-driving cars. Urmson has been on a charm offensive with the world’s biggest automobile manufacturers. At the North American International Auto Show in January, Urmson announced talks with General Motors, Ford, Toyota, Daimler and Volkswagen. In March, he told USA Today: “Making cars is really hard, and the car companies are quite good at it. So, in my mind, the solution is to find a partnership.”

To date, no such partnership has emerged. That might be because Google already has its very own car maker in Google Auto. The company is registered with national and international organisations as a passenger vehicle manufacturer, and was licensed last year as a car maker in California. Google declined to comment on this story.

Documents obtained by the Guardian under a Public Records Act request in California show that Google Auto was formed as a limited liability company in late 2011. Initially, Google used it to modify and test the fleet of driverless Lexus SUVs that succeeded the company’s first self-driving Prius saloons. Google Auto is named as the manufacturer of all 23 autonomous Lexus cars registered with California’s department of motor vehicles, including all the vehicles involved in a recent spate of minor accidents in and around Google’s home town of Mountain View.

Although no lawsuits have been filed regarding these accidents, it’s common for businesses to set up subsidiaries when trying something new and potentially risky, says Anita Krug, associate professor of law at the University of Washington in Seattle. “When you have a separate entity, you generally have separate liability protection,” she says. “The idea is that if the subsidiary has financial difficulties, creditors should not be able to go after the parent company’s assets.”

But as Google’s ambitions for its self-driving technology grew, so did Google Auto’s role. In late May last year, Chris Urmson was appointed manager of Google Auto, taking control of day-to-day operations of the company. The very next day, Google announced that it was going to build 100 prototype self-driving cars from scratch, without steering wheels, accelerator or brake pedals.

Paperwork filed by Google Auto with the NHTSA, and seen by the Guardian, indicates that the cars are rear-wheel drive in design, with each wheel having its own braking system. The cars are powered by a modest 20-30kW electric motor from a lithium ion battery. All the cars built so far have been assembled on the outskirts of Detroit, Michigan, by Google’s manufacturing partner, the engineering firm Roush.

In correspondence with Mark Rosekind, administrator of the NHTSA, Urmson insisted, “Google Auto LLC has not offered any of its LSVs for sale, and it does not plan to do so.” This is not surprising. With Google so far ahead of other car makers in developing self-driving systems, it would be unlikely to market experimental vehicles packed with cutting-edge technology.

However, that does not rule out Google Auto from selling driverless cars direct to the public later on. In fact, says Sebastian Thrun, the computer scientist and engineer who launched Google’s self-driving car project: “The ambition for Google is always to go all the way [from research] to product.”

Google has not formed subsidiaries for other hardware projects originating in its secretive Google X division, such as the Google Glass wearable computer. That could be telling, believes Anita Krug. “It could well be the product of Google’s anticipation for the success of the company, that at the get-go they started it with a different company,” she says. “The thought might have been, let’s have a wholly owned subsidiary now and maybe if it does succeed, we can just spin it off into its own company.”