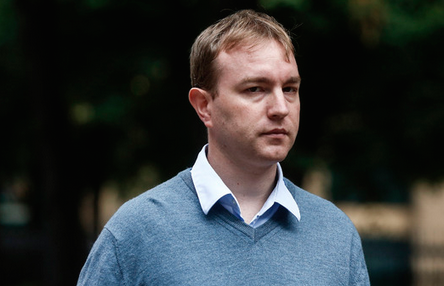 Update: Hayes has been sentenced to 14 years in jail.

Tom Hayes, the former UBS trader standing trial for his role in manipulating LIBOR, was found guilty on eight counts in a London court. The jury, which deliberated for a week, was unanimous in its decision. To wit, from Bloomberg:

After a week of deliberations, jurors unanimously found that the 35-year-old conspired with traders at brokers to dishonestly game the London interbank offered rate to benefit his own trading positions.

As Bloomberg notes, Hayes is the first person to stand trial for rigging the benchmark and had contended that he only pleaded guilty in the first place because he had an intense fear of having to serve a lengthy prison sentence in the US.

Hayes was also quick to remind the court that the practice of gaming the submissions to benefit trading books was so ubiquitous as to be enshrined in an official LIBOR rigging guide called “Guide to Publishing Libor Rates” that was distributed to UBS employees. It was also revealed during the trial that Hayes has been diagnosed with Asperger’s syndrome, which means he tends to “only see the world in black and white” – apparently that was supposed to be seen as a mitigating factor.

In the end, it appears that the public needed a head (not literally we hope), and because prosecuting senior executives for such things is absolutely out of the question even when, as we saw last week with Anshu Jain, they were not only supportive of the practice but in fact physically moved desks around to facilitate it, Hayes will be the fall guy.

Or, as we put it in June: “Will Hayes’ quest to diffuse responsibility and bring down more senior executives with him succeed? Hardly.”

We’ll give Tom the last word here and although we’re not entirely sure what this quote means, we’re sure there’s a lesson in it somewhere:

“I’ve always wanted to do my job as perfectly as I could, whether I was cleaning a deep fat fryer or deboning a chicken. They always gave me those jobs because they knew there would be no chicken left on the bone and no fat left in the fryer.”