With yesterday’s appearance what seems like the first Iran oil tanker to set sail post-nuke-deal, Haaretz reports that Iran has been hiding millions of barrels of oil it never reported to the United States or in the world oil market, according to a company that has developed sophisticated maritime tracking technology. With the world’s fourth-largest oil reserves, Iran denies it’s storing oil at sea, despite reports that surfaced in The New York Times as early as 2012; but Ami Daniel, Windward founder and cochairman, shows “the Iranians are taking huge, 280-meter-long ships and filling them with oil, to sit at sea and wait. Because the sanctions allow for production of only three million barrels a day, they began storing the remainder… oil tankers have been sitting in the Gulf for anywhere between three and six months, just waiting for orders.”

Searching for ships that do not want to be found…

As Bloomberg explains, based in Tel Aviv, Windward was founded four years ago by two Israeli naval officers…

The algorithms Windward developed were initially intended to tackle illegal fishing by analyzing and profiling normative patterns in sea traffic. The entrepreneurs discovered that their technology could also be used to monitor unusual behavior near, say, oil-drilling ports in Libya.

These anomalies of maritime behavior, which occur daily, would have probably gone undetected in the past. Today, advanced satellite imaging and communications technology, coupled with analytical software developed by an Israeli startup called Windward, identifies potential illegal activity in real time.

“Everything affects everything else in the sea,” Daniel said in an interview. “We see when things are beginning to happen. We give you the insight first because we can see when patterns start changing.”

As Haaretz reports, Windward claims that Iran is currently storing 50 million barrels of crude on tankers in the Gulf, a much larger amount than estimates from Western sources. Bank of America has estimated Iran is holding 30 million barrels, while the U.S. news broadcaster CNBC put the number at 40 million.

According to Windward, the Iranian ships are purposely hiding their cargo.

According to Windward, the amount of oil Iran is storing offshore has jumped more than 150% over the last year to over 51 million barrels as of Wednesday. The increase coincided with nuclear talks with world powers led by the U.S. while Iranian President Hassan Rohani publicly claimed Iran did not have enough oil to fulfill its own needs.

The amount of oil Iran is holding is far larger than the daily quota of 30 million barrels imposed by the Organization of the Petroleum Exporting Countries on its members.

Iran currently produces 3.3 million barrels of oil daily, according to the U.S. Energy Agency, slightly more than the three-million-barrel ceiling stipulated by the sanctions, which allow Iran to export no more than one million barrels a day.

Limitations were also placed on Iran’s oil-storage facilities, which Tehran apparently circumvented with the offshore storage scheme. The amount of oil involved is quite extensive: Annually, Iran pumps 1.204 billion barrels of oil, meaning the offshore oil stores reported by Windward account for 4.2% of Iran’s yearly production. In total, there are 28 Iranian tankers in the Gulf, each holding between one and two million barrels, according to Windward. 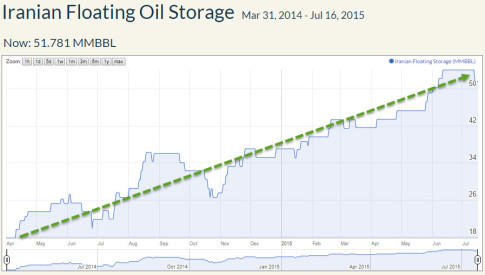