“Several days ago when we first calculated that the new Greek debt/GDP post bailout #3 will promptly hit 200%, something the IMF agreed with earlier today. But it won’t stop here, and as the  following analysis from Michael Lebowitz at 720 Global shows, just based on the country’s negative growth rate and positive interest rate, Greek debt/GDP will keep rising indefinitely and will likely hit 336% in about one decade, at which point Greece will, for all intents and purposes, cease to exist.”

Back in 2012, when the IMF forecast that by 2022 Greek debt would become sustainable (under 120%) we laughed, and laughed, then laughed some more (see: The Farcical Tragicomedy Of The “Sustainable” Greek Debt/GDP “Denominator from November, 2012)

Three years later the IMF itself not only admitted its original Greek debt “sustainability” predictions were total garbage (hence our quarterly humor series presenting the latest and greatest IMF projections about world growth), of which the most humorous was its forecast of Greek 2016 GDP growth as the highest in the entire Eurozone… 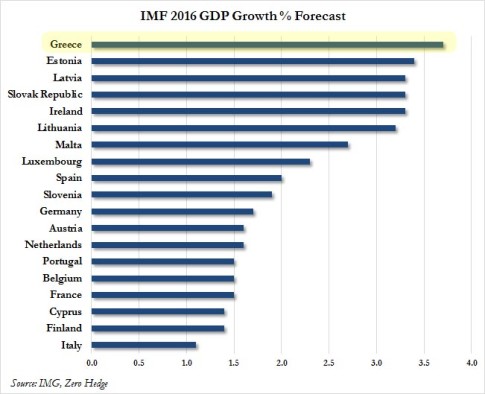 … but the IMF itself, under pressure from Washington, has become the biggest advocate of debt forgiveness, just not its own debt: that of the ECB will do nicely.

Unfortunately, while these global financial institutions conduct their monetary experiments, it is ordinary people who are used like Guniea pigs, in this specific case, the people of Greece, whose fate once they vote through the third and final bailout (there will not be a fourth) will be a world of absolute misery.

And to show just how absolute said misery will be, we present an analysis that layers on what we said several days ago when we first calculated that the new Greek debt/GDP post bailout #3 will promptly hit 200%, something the IMF agreed with earlier today.

But it won’t stop here, and as the following analysis from Michael Lebowitz at 720 Global shows, just based on the country’s negative growth rate and positive interest rate, Greek debt/GDP will keep rising indefinitely and will likely hit 336% in about one decade, at which point Greece will, for all intents and purposes, cease to exist.

“Life is really simple, but we insist on making it complicated.” – Confucius

Occam’s Razor is a frequently quoted principle which states that when one is faced with a multitude of seemingly complex possibilities, the simplest approach or explanation is best. As the ECB and Greece fight over terms of yet another bailout we employ this principle to help better grasp Greece’s dire situation.

Greece has a current debt to GDP ratio of 170%, and based on current bailout terms, it will likely grow to well over 200%. So applying the logic from above, Greece’s GDP growth rate prior to the current bailout needed to be 1.70 times greater than the rate of interest Greece pays on its debt just to keep its ratio constant. Following are some facts which will allow us make judgements on Greece’s ability to improve or at least sustain their debt to GDP ratio:

In both examples we make the very bold assumption that Greece will run a balanced budget excluding interest expense. The results, as plotted below, are not encouraging. 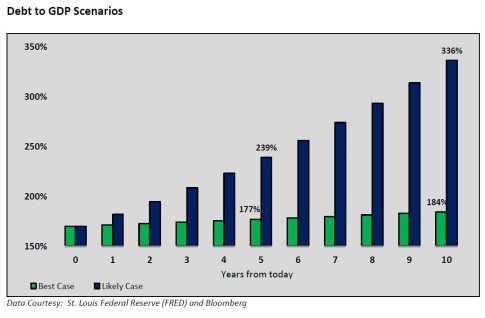 Greek bonds have rallied sharply on hopes that a bailout will help Greece avoid default. We believe the current terms simply delay the inevitable. In the scenarios above we were very generous with the assumption that Greece will run a balanced budget. Consider that since 1990, Greece has averaged a total budget deficit equal to 8.17% of GDP and has never run a surplus going back to at least 1990. One of the goals of the current round of negotiations are structural reforms designed to help Greece reverse its troubling debt to GDP ratio. Reforms are imperative if Greece is to ever become economically viable.

That said, reforms are widely unpopular, take time to enact and take even longer to show results. We believe default, or the politically correct term “debt forgiveness”, is the most likely outcome. When combined with reforms, Default is the only option which leaves Greece with a fighting chance to avoid being in the same situation a few years from now. The CDS and bond markets are likely over-reacting today as they did with the prior bailouts of 2011 and 2012.