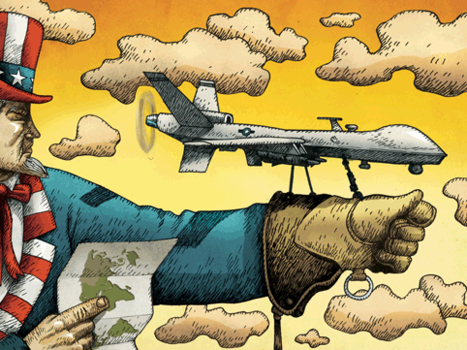 New Edward Snowden leaks shed light on the details of US drone strikes in places like Yemen and Pakistan and the tracking technologies that helped them. They focus on a strike targeting an Al-Qaeda surgeon that resulted in civilian casualties.

The documents reviewed by the New York Times and the Guardian deal with the March 30, 2012 attack aimed at killing Dr. Khadim Usamah. The GCHQ newsletter, Comet News, described Usamah as a member of the Yemen-based Al-Qaeda in the Arabian Peninsula (AQAP) and “the doctor who the doctor who pioneered using surgically planted explosives.”

According to the database of drone strikes maintained by the Bureau of Investigative Journalism, the attack reportedly killed five AQAP militants and one civilian – Mohamed Saleh al-Suna, 60 – while injuring nine civilians, including six children.

The documents also discuss how the strike was a product of the joint program between the US, British and Australian intelligence agencies. The Guardian described the program, codenamed “Overhead,” as operation based on “satellite, radio and some phone collection of intelligence.”

At the urging of the NSA, Yemen became a priority for the surveillance agencies involved in Overhead in 2010, following the failed 2009 “underwear bombing.” AQAP claimed responsibility for the Christmas Day incident, when Nigerian national Umar Farouk Abdulmutallab attempted to detonate explosives hidden in his underwear on board a flight from Amsterdam to Detroit. Instead of detonating, the bomb ignited and singed Abdulmutallab, who was then overpowered by the passengers and crew of the airplane.

It was the second spectacular failure for AQAP’s chief bomb-maker, Ibrahim al-Asiri. Earlier that year, he reportedly planted a bomb in his younger brother Abdullah’s rectum, with the intent to assassinate Saudi Arabia’s counter-terrorism chief, Mohammed bin Nayef. Abdullah died in the explosion, but Bin Nayef was unharmed.

Yemen, Libya, Iraq, Syria. How drones and remote warfare is dragging the UK into more and more armed conflicts: http://t.co/MSni7B3qyo

The 2012 drone strike was the result of US and UK spy agencies concerns that al-Asiri might develop a successful bomb, which Dr. Usamah could then implant into a suicide bomber, bypassing standard airport security measures.

Even before the pivot to Yemen, GCHQ was eager to provide “tactical and strategic SIGINT support to military operations in-theatre, notably Iraq and Afghanistan, but increasingly Pakistan,” reported the Guardian citing a June 2009 document. SIGINT is a common acronym for “signals intelligence,” referring to intercepted communications. The document adds that in Pakistan, “new requirements are yet to be confirmed, but are both imminent and high priority.”

The revelations have raised questions in the UK about the country’s involvement in undeclared US wars in Yemen, Pakistan and elsewhere.

While officials insist the government broke no laws, the British public is very much opposed to drone warfare. According to a 2014 Pew Research Center poll, 59 percent of Britons opposed the drone strikes, while only 33 percent approved.

While polls show over 50 percent of Americans support drone warfare, 45 US military veterans recently called on drone operators to stand down and stop the killing missions.

“At least 6,000 lives have been unjustly taken by US drone attacks in Afghanistan, Pakistan, Yemen, Somalia, Iraq, the Philippines, Libya and Syria. These attacks are also undermining principles of international law and human rights,” the 45 veterans wrote last week.

Navy veteran Nick Mottern explained to Air Force Times why he believed that a drone pilot might hang up the controller. “One answer would be, ‘To save your soul’,” he said. “Another answer would be, ‘To not kill people who are being targeted without any due process.’ There are higher laws than military law.”