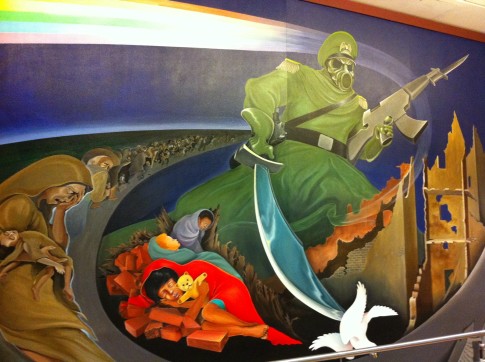 My name is Christina and I’ve contacted you before regarding “Jade Helm” ….I’ve recently put together a video on troops moving through my small town in Colorado, which I have supplied the link at the bottom of this email.  My research has led me to “Jade Helm” exercises being done in Colorado under the guise, a renaming or a subset called “Raider Focus” which I did find a source on your website and used one of the videos on “Raider Focus” from “The Next News Network” …..now, I’m an amateur at reporting, non the less, I try my best to put accurate information out there.

I’ve had a few people comment that Colorado has opted out of “Jade Helm” and I’ve found a few articles, which leave me in doubt, but they ascertain that this is true. I’m wondering if you know if this is true?  With what I’ve seen in my small town and around the state ….to me it seems like they are participating in “Jade Helm” under “Raider Focus.”

I’d like to know your take on this and if Colorado has in fact opted out, why we are still seeing troops moving across the state and participating in related exercises?  I know how busy you are, but can you confirm this for me one way or another?

I appreciate all you do to keep us informed!

La Junta resident, Christina Sarro, has taken extensive footage of both her accounts of the “old” Walmart, now closed, and the current Walmart which is fully open.

In the following video, taken by Christine, she documents an overwhelming military presence at the open Walmart in La Junta. Towards the end of this first video, she captures on tape an unmarked black van, with all blacked out windows dropping of soldiers in front of the Walmart.

In the second video, Christina catches some very revealing footage that at first seemed to go unnoticed. In this footage, there is a massive convoy of military vehicles parked at an abandoned Walmart in La Junta. The military vehicles were unmarked as far as the video showed. For what purpose would the military use unmarked vehicles in a domestic martial law drill? Answer: They can easily be adapted for use by foreign troops.

What was most concerning to me was the presence of La Junta city vehicles in the back of the store and men in civilian clothing, presumably city workers were huddled, just inside the rear entrance, and were appearing to be conferencing when Christina show up. These men did not want to be seen as they quickly moved to confront Christina. The owner of the “closed” Walmart property engaged Christina as they obviously saw here filming. He told her that this was a facility now being used for work connected to marijuana. Private marijuana use is now legal in Colorado. Why, then would it be necessary for city workers to be at the site where the military claims they are only going to be parking their vehicles for a “couple of hours” and legal drug dealers are making pot?

There are more troubling questions with regard to this encounter. Is it simply not believable that a military convoy of this massive size would simply just “show up” at 7AM and ask the owner of the property for a place to park? The phrase “I have got some swamp land in Florida….” comes to mind. And it isn’t a coincidence that all this takes place at a closed Walmart? Further, please note the precision and organization that the vehicles were parked with. This kind of organization did not just happen for a convoy of this size that was simply just looking for a temporary rest stop, which conveniently, was connected to yet another closed Walmart. What I am saying here is that between seeing massive amounts of unmarked vehicles at a closed Walmart, seeing city workers, who are probably involved in retrofitting the Walmart and a land owner that is lying about his participation in this whole process, adds up to some very mysterious activities that is not in the best interest of the American people.

DAHBOO 777 has collected several videos sent to him from people from around the country who are witnessing the prepositioning of the occupation troops which will soon be mastering the human domain. Please note that in this presentation, the Tennessee closed Walmart is eerily similar to the one captured by Christine Sarro in La Junta, CO.

Executive Order 13603 Validates All That Is Written Above

In 2011, President Obama signed his own executive order which allowed for the President to enact slave labor, on a large scale, on American soil.

For the Americans who have been targeted for FEMA camp detention, most will voluntarily self-incarcerate in order to avoid starvation for both them and their families. The following excepts from EO 13603 will be enacted.

Third world population control, using food as one of the primary weapons, has long been a matter of official covert US national policy and a portion of President Obama’s Executive Order (EO 13603) is a continuation of that policy. Americans will be the new third world and your food will be withheld in order to enforce compliance with the planned slave labor in support of the WW III production needs.

Most Americans will report for duty on a voluntary basis in order to avoid starvation. Duty for what?

According to Executive Order 13603, the President, or the head of any federal agency that he shall designate, can conscript “persons of outstanding experience and ability without compensation,” in both “peacetime and times of national emergency.”  I can hear the Obama supporters now as they will write to me and say, “Obama would never do that, you are drinking from the Kool-Aid”.  Well, here it is, you can read it for yourself.

Sec. 502.  Consultants.  The head of each agency otherwise delegated functions under this order is delegated the authority of the President under sections 710(b) and (c) of the Act, 50 U.S.C. App. 2160(b), (c), to employ persons of outstanding experience and ability without compensation and to employ experts, consultants, or organizations.  The authority delegated by this section may not be redelegated.

This means that Obama, and his fellow communists, can seize any resource, property, or person at any time for any reason, including being able to forcethat person to perform assigned labor without being paid.

There is only ONE word for forced, “uncompensated employment”. That word is slavery. Congratulations to President Obama, he has effectively repealed the 13th Amendment to the Constitution.

Section 601 of the act specifies, in part, how far the government can go in terms of making you their slave.

(1) collect and maintain data necessary to make a continuing appraisal of the Nation’s workforce needs for purposes of national defense;

(3) upon request from the head of an agency with authority under this order, consult with that agency with respect to: (i) the effect of contemplated actions on labor demand and utilization; (ii) the relation of labor demand to materials and facilities requirements; and (iii) such other matters as will assist in making the exercise of priority and allocations functions consistent with effective utilization and distribution of labor;

(4) upon request from the head of an agency with authority under this order: (i) formulate plans, programs, and policies for meeting the labor requirements of actions to be taken for national defense purposes; and

Is there any question that this is an enslavement document? If you are not convinced, please allow me to encourage you to read this again. If the above section was merely going to be a military draft, then the Secretary of Labor would not have to be involved. However, as you will note the “Secretary of Labor, in coordination with the Secretary of Defense and heads of other agencies, as deemed appropriate by the Secretary of Labor, shall: …assist in the development of policies regulating the induction and deferment of persons for duty in the armed services;… formulate plans, programs, and policies for meeting the labor requirements of actions to be taken for national defense purposes; and (ii) estimate training needs to help address national defense requirements and promote necessary and appropriate training programs…”.  Refer back to section 502 of sections 710(b) and (c) of the Act, 50 U.S.C. App. 2160(b), (c); these are the people that the Secretary of the Labor will conscript in order “to employ persons of outstanding experience and ability without compensation and to employ experts, consultants, or organizations”.

This, my fellow Americans, is a civilian conscription and this is why the Secretary of Labor is in charge instead of the head of the Selective Service! Under these provisions, the government believes that they can send you anywhere, to work on anything of their choosing.

My best sources are telling me that they have learned that many of the closed Walmarts are processing centers and will be used to microchip, for tracking purposes, and indoctrinate the detainees as to their new status and purpose in life.Through some timely video and a confluence of factors, we are witnessing the manifestation of the enslavement of America. And the micro-chipping will make the notion of escaping a moot point.

… and not just the third world …

(As a side note: That Ramtha (i.e. Scamtha) thing, allegedly channeled by JZ Knight, is a complete scam and fraud. Proof can be found all over the internet. So just because the truth was accidentally spoken at this evil place, because Rima Laibow and General Stubblebine were (paid) speakers, does not mean that this is real. It isn’t!)