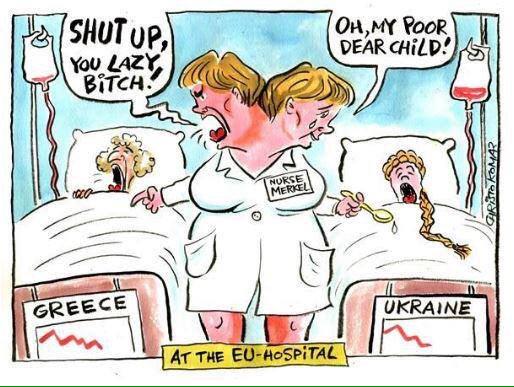 – IMF Humiliates Greece, Repeats It Will Keep Funding Ukraine Even If It Defaults (ZeroHedge, June 19, 2015):

One week ago, we were stunned to learn just how low the political organization that is the mostly US-taxpayer funded IMF has stooped when, a day after its negotiators demonstratively stormed out of the Greek negotiations with “creditors”,  Hermes’ ambassador-at-large Christone Lagarde said that the IMF “could lend to Ukraine even if Ukraine determines it cannot service its debt.”

In other words, as Greece struggles to avoid a default to the IMF on debt which was incurred just so German banks can remain solvent and dump trillions in non-performing loans to US hedge funds and Greek exposure, and which would result in the collapse in the living standards of an entire nation (only for a few years before an Iceland-recovery takes place, one which Greece would already be enjoying had it defaulted in 2010 as we said it should), and as the “criminal” IMF does everything in its power to subjugate an entire nation, or else let it founder, the IMF told Soros’ BFFs over in Kiev, that no matter if they default to its private creditors (in fact please do since Russia is among them), the IMF would keep the debt spigot flowing.

Courtesy of the US taxpayer of course.

Fast forward one week when, with Greece one step closer to a full-blown financial collapse, the IMF comes out and tell Ukraine – which already passed a law allowing it to impose a debt moratorium at any moment – not to worry, that even in a default it will keep providing unlimited funds. From Reuters:

Ukraine’s efforts to strike a debt restructuring deal with its creditors will allow the International Monetary Fund to continue to support the country even if the talks are not successful, the head of the IMF said on Friday.

“I … welcome the government’s continued efforts to reach a collaborative agreement with all creditors,” IMF Managing Director Christine Lagarde said in a statement. “This is important since this means that the Fund will be able to continue to support Ukraine through its Lending-into-Arrears Policy even in the event that a negotiated agreement with creditors in line with the program cannot be reached in a timely manner.“

We will pass comment on this latest grand IMF hypocrisy and ask if Greece would rather be in Kiev’s place which at the behest of “Western” leaders, it sold, liquidated, and otherwise “lost” all of its gold. Or, like Ukraine, Athens is willing to part with its $4 billion in gold just to appease the Troika as it sells all of its 112.5 tons of official gold to unknown buyers. A transaction which would buy Greece about 3-6 months of can kicking and a few stray smiles from Chrstine Lagarde.

1 thought on “IMF Humiliates Greece, Repeats It Will Keep Funding Ukraine Even If It Defaults”