To summarize – a man who profers to deliver unbiased personal reporting but instead lied through his teeth to enrich his own ego has been demoted to an audience 90% lower but still gets paid $10 million!!!!

Welcome to the new normal America. 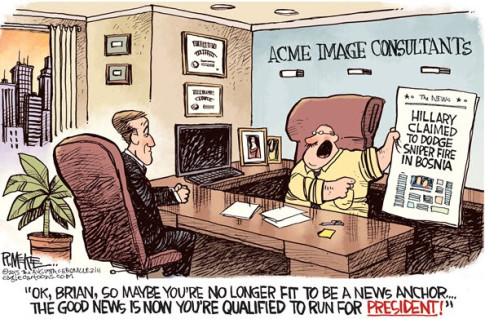 Brian Williams – the disgraced lying ex-anchor of NBC Nightly News – has been demoted drastically to breaking news on MSNBC. He also took a significant pay cut. But do not feel too bad for the pathological narcissist. As TheWrap reports, the newsman will still earn a stunning $8-10 million. In today’s consequence-less world, it appears it now pays to lie, but do not be disturbed as Williams has allegedly commented that he “identifies as an honest news anchor.”

Brian Williams will still make close to $10 million per year despite his demotion to a breaking news role at MSNBC, which has at best just 10 percent the audience of the “NBC Nightly News” broadcast, an individual with knowledge of his compensation told TheWrap.

The insider said that Williams would be making “between $8 and $10 million,” adding that the figure represented what the former anchor considered a big cut in pay.

The disgraced news anchor was making closer to $15 million at the network, not the $10 million that has been previously reported, the insider said.

But multiple individuals told TheWrap that Williams’ salary cut was not as significant as might be expected, given how much smaller the MSNBC audience is than that of the network he was leaving.

To summarize – a man who profers to deliver unbiased personal reporting but instead lied through his teeth to enrich his own ego has been demoted to an audience 90% lower but still gets paid $10 million!!!!

Welcome to the new normal America.