Athens is likely to leave the eurozone and the EU if it fails to reach an agreement to unlock a €7.2 billion bailout installment, said a statement from the Bank of Greece.

“Failure to reach an agreement would, …, mark the beginning of a painful course that would lead initially to a Greek default and ultimately to the country’s exit from the euro area and – most likely – from the European Union,” the bank said in a statement Wednesday.

The manageable debt crisis Greece is now facing may turn into an uncontrollable and broader crisis, dangerous for the banking system and financial stability, the bank added. An exit from the eurozone would only add to hostility that is already felt, and, as a result, a deep exchange rate crisis would make inflation skyrocket.

“All this would imply a deep recession, a dramatic decline in income levels, an exponential rise in unemployment and a collapse of all that the Greek economy has achieved over the years of its EU, and especially its euro area, membership. From its position as a core member of Europe, Greece would see itself relegated to the rank of a poor country in the European South,” the bank said.

This is why the bank called a debt deal a “historical imperative” impossible to ignore.

The five-months of inconclusive negotiations have led to a high level of uncertainty in Greece, which is hitting the country hard, the bank said. This reflected in higher Greek bond yields and Greek businesses losing financing in the capital markets.

“On the domestic front, heightened uncertainty was reflected in the deterioration of economic sentiment and confidence indicators and in bank deposit withdrawals by businesses and households.”

Between October 2014 and April 2015 €30 billion was withdrawn from deposits, the bank said.

Fears of Greece leaving the euro escalated after the country delayeda €300 million payment to the IMF on June 5, saying it’ll bundle four June payments totaling €1.6 billion together and pay them at the end of the month.

So far the negotiations have failed to meet halfway over reforms in Greece which is the main condition for Athens to receive the last €7.2 billion tranche of the second bailout. But the Bank of Greece said a compromise on the main conditions and smaller issues remained to be covered. 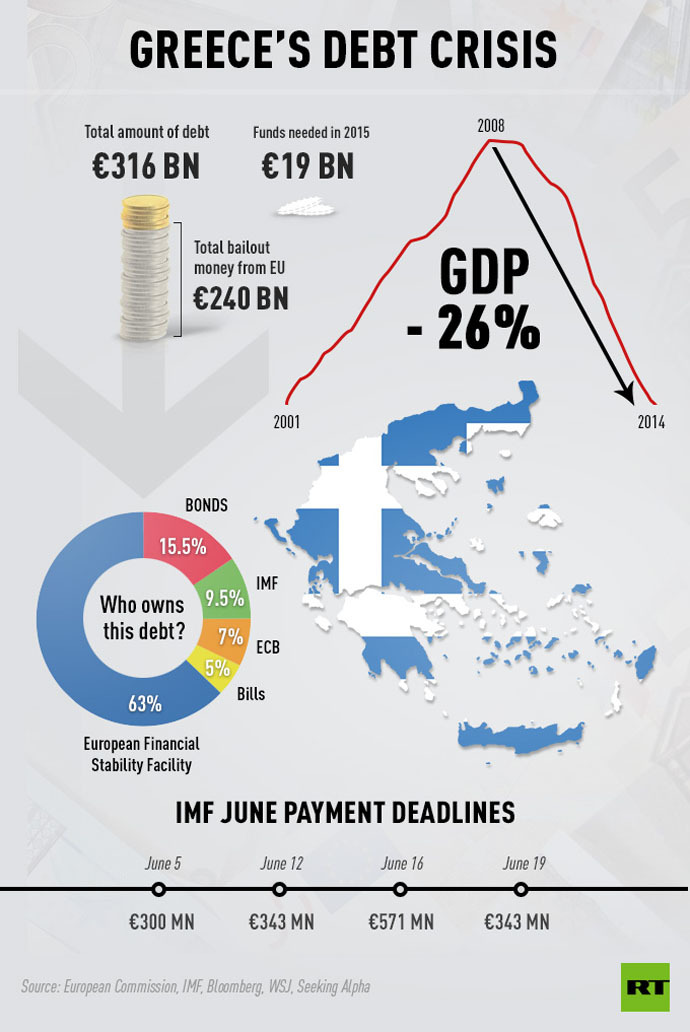 Greece maintains it won’t accept new deep austerity cuts while the country’s creditors – the IMF, the ECB and the European Commission – insist on more financial responsibility from Athens.

Despite some write-offs of Greek debt made by creditors in 2012, its public debt currently stands at €316 billion, about 175 percent of the country’s GDP. The maximum acceptable level for the EU should be not more than 60 percent of GDP, according to the EU’s Stability and Growth Pact.

Austerity measures have seen unemployment rise from 12 to 27 percent in three years, GDP has fallen by 26 percent since 2008, Greeks are under a huge tax burden, and the number of people living below the poverty line is increasing every day, said Prime Minister Alexis Tsipras last week. His Syriza party came to power promising to end austerity.

Over the last five years, Athens has reduced pensions by up to 44 percent, reduced salaries in the private sector by up to 32 percent, and seen its labor market crushed, he added.