Being married to Cass Sunstein this should be not surprising … 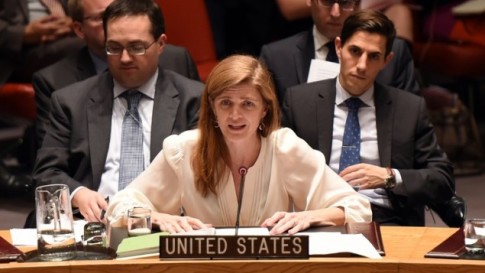 Ambassador to the United Nations Samantha Power on Tuesday assured Congress that Washington was committed to combating efforts to “delegitimize” Israel, but declined to say whether the Obama administration would veto a potential Security Council resolution setting terms for the establishment of a Palestinian state.

Power made the comments during a speech before the House Foreign Relations Committee hearing in response to comments by committee chairman Ed Royce, who expressed concern as to the administration’s commitment to Israel.

Royce, a Republican, said it was “disturbing” that the Obama administration “seems on the brink of discarding decades of bipartisan support of Israel against the UN onslaught.”

Asked specifically if the US would veto any UN resolution that forces or imposes a two-state solution on Israel, Power said it was “perilous to make blanket statements” about hypothetical scenarios, but that the US would oppose any resolution that undermined Israel’s security.

After Prime Minister Benjamin Netanyahu said in the lead-up to Israeli elections in March that a Palestinian state would not be established on his watch, President Barack Obama said he would reassess US policy toward Israel.

Netanyahu has since tried to walk back his statement, saying he is committed to a sustainable, peaceful two-state solution, and was merely commenting on the likelihood of a two-state solution in the foreseeable future. But US officials say his statement makes it harder for Washington to fight criticism of Israel.

Power defended the administration’s pro-Israel credentials, saying that “day in and day out, we push back against efforts to delegitimize Israel at the UN, and fight for its right to be treated like any other nation.”

On Monday, Knesset member and former ambassador to the US Michael Oren penned a scathing attack in the Wall Street Journal on Obama’s policies toward Israel, claiming that the US president had “abandoned” the Jewish state by “deliberately” deviating from several crucial, long-held traditions in the relationship.

Oren said that the potentially most harmful consequence of the rift in relations between the two allies was the nuclear negotiations that the US has been conducting with Israel’s “deadliest enemy” — Iran.