“It occurs to me that such massive speculation in COMEX silver futures may not be in keeping with the spirit and intent of commodity law and may suggest something is wrong with the price discovery process, since real producers and consumers of silver don’t appear to be represented…. As one of the largest primary silver producers in the world, we feel that an effective and fair pricing mechanism is critical for the healthiness of our industry and for the millions of people impacted by what appears from the outside, to be manipulative practices by a concentration of players.”

–  One Of The World’s Largest Silver Miners Slams The CFTC About Silver Market Manipulation (ZeroHedge, June 3, 2015):

It has long been known to silver market watchers that when it comes to the price of paper silver, there has long been a chronic and extremely concentrated shorting presence at the Comex, one which the CFTC has persistently refused to address even though it consistently surpasses the proposed limits on derivative positions. Now, at long last, a Canadian silver miner, First Majestic Silver Corp., has decided to take the CFTC to task.

In a letter penned by Ted Butler to CFTC Chairman Tim Massad (who recently replaced former Goldmanite and future US Treasury Secretary, Gary Gensler), Keith Neumeyer, CEO of First Majestic, became the first primary silver producer to vocally highlight some of the questionable activity reported weekly in the CFTC’s Commitment of Traders report, specifically the “record position change of more than 28,200 net contracts of COMEX silver futures” the equivalent of 141 million ounces of silver and 61 days of world mine production. Incidentally, this was first observed here one week ago.

Neumeyer observes accurately that the “big changes in positions on the COMEX are by speculators and commercials acting as speculators and not by those engaged in bona fide hedging” and comments that “such massive speculation in COMEX silver futures may not be in keeping with the spirit and intent of commodity law and may suggest something is wrong with the price discovery process, since real producers and consumers of silver don’t appear to be represented.”

Neumeyer concludes that such moves in the futures market “appear from the outside to be manipulated practices by a concentration of players.”

Don’t hold your breath for a response, however. Recall that less than two years ago, under the aegis of Bart Chilton who is currently a handsomely paid lobbyist at DLA Piper on behalf of the HFT lobby after spending years bashing them while at the CFTC, the commodity regulator closed its “investigation” concerning manipulation in the silver market, without finding anything:

Washington, DC – The Commodity Futures Trading Commission (CFTC or Commission) Division of Enforcement has closed the investigation that was publicly confirmed in September 2008 concerning silver markets. The Division of Enforcement is not recommending charges to the Commission in that investigation. For law enforcement and confidentiality reasons, the CFTC only rarely comments publicly on whether it has opened or closed any particular investigation. Nonetheless, given that this particular investigation was confirmed in September 2008, the CFTC deemed it appropriate to inform the public that the investigation is no longer ongoing. Based upon the law and evidence as they exist at this time, there is not a viable basis to bring an enforcement action with respect to any firm or its employees related to our investigation of silver markets.

Curiously, this investigation took place during a time when the CFTC, as it publicly admitted recently never even looked at spoofing activity in the precious metals markets, which also explains why two days ago, another Indian scapegoat (the third in a row after Navinder Sarao and Nasim Salim), one Himanshu Kalra was busted for spoofing gold and silver in the period between March 1, 2012 and October 31, 2012 – a span of time which was covered by the CFTC’s grand silver manipulation which concluded in September 2013, and yet which the CFTC completely failed to notice. 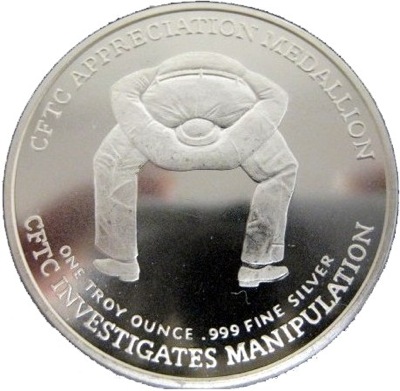 And yes, in a non-banana republic, a regulator so humiliated would be forced to at least reopen its “investigation” and admit that it was wrong and has missed glaring examples of market rigging, but in the US that won’t happen.

Which is also why while we salute First Majestic with this first public appeal by a corporation to the CFTC to stop the rigging in the silver market, we have absolute certainty that this too complaint will promptly end up in Mr. Massad trash never to be heard from again. 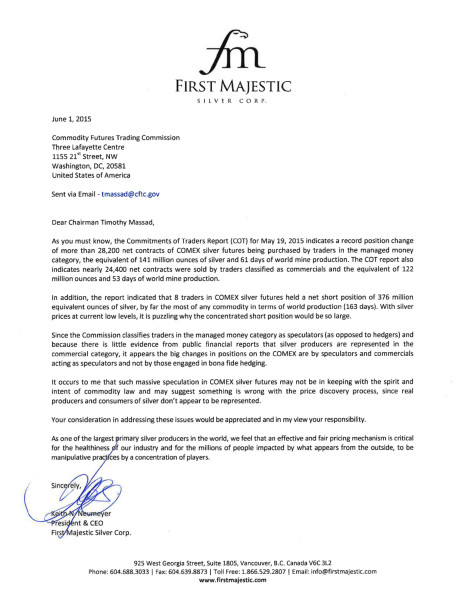