“Still expanding NATO into former USSR satellites in total contradiction to the agreement between Baker and Gorbachev.” 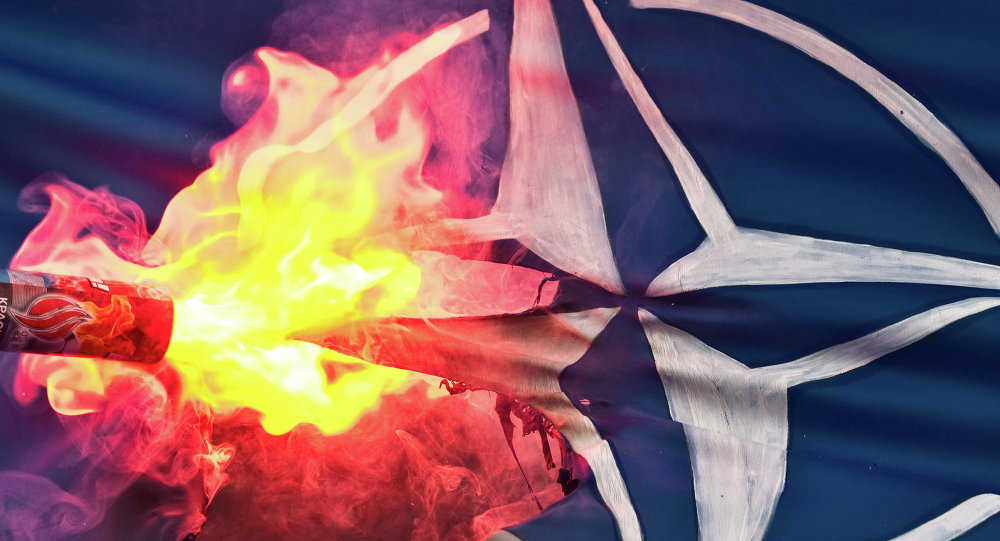 NATO is set to break a 1997 treaty it signed with Russia by establishing permanent forces in Latvia, as it piles in more troops to the Baltic States.

Latvia’s Cabinet of Ministers has approved a request to ensure a permanent NATO military presence in the country following a review of Latvia’s NATO membership. Latvian Prime Minister, Laimota Straujuma, told the Baltic Times that government ministers were evaluating how plans proposed during the NATO Wales Summit in September 2014 to reverse the decline in military spending were progressing.He said generals from Lithuania and Estonia will also request NATO deploys several thousand ground troops in their countries. Lithuanian military spokesman Captain Mindaugas Neimontas said:

“We are seeking a brigade-size unit so that every Baltic nation would have a battalion.”

NATO’s Supreme Allied Commander of Europe, Philip Breedlove, said the three countries were to seek “permanent rotational NATO forces” as a “deterrence measure due to the security situation in the region.”

However, the deployment of permanent forces flies in the face of the Founding Act on Mutual Relations, Cooperation and Security between NATO and the Russian Federation which was signed in Paris, France on 27 May 1997.

It declared that “NATO and Russia do not consider each other as adversaries” and that the two parties will work together to prevent any potentially threatening build-up of conventional forces in agreed regions of Europe, to include Central and Eastern Europe.

The Act states that NATO “will carry out its collective defense and other missions by ensuring the necessary interoperability, integration, and capability for reinforcement rather than by additional permanent stationing of substantial combat forces.”

Breedlove refused to confirm the number of troops that will be deployed in the region, but suggested a standard NATO brigade could consist of around 3,000 soldiers.

In February, NATO Secretary General Jens Stoltenberg, in a meeting with the Latvian President, said: “The Alliance’s responsibility is to protect and defend each and every Ally against any threat. And NATO’s support for its eastern Allies, including Latvia, was confirmed at the recent NATO Defense Ministers’ meeting in Brussels.

Historically, NATO — heavily backed by the United States — has sought to spread its influence further eastward, despite an alleged agreement after the reunification of Germany, that it would not encroach on the former Warsaw Pact nations. At the time, former Russian President Mikhail Gorbachev was said to have been assured by (then) US Secretary of State James Baker there would be “no extension of NATO’s jurisdiction one inch to the east.”

Since then, the onward march of NATO eastward has continued unabashed with the Czech Republic, Hungary, Poland, Slovenia, Slovakia, Romania, Bulgaria, Croatia, Albania, Latvia, Lithuania and Estonia all joining the Washington-led military coalition.

The breach in the NATO-Russia Founding Act has been denied by NATO spokesperson Ms Oana Lungescu.

“NATO continues to act in full compliance with its commitments under the NATO-Russia Founding Act,” Ms. Lungescu told Sputnik.

“In response to Russia’s aggressive actions in Ukraine, we have increased our military presence in the eastern part of our alliance. This presence is rotational and well below any reasonable definition of substantial forces.

“Plans to set up six command and control centers in Eastern Europe are also consistent with the Founding Act, which explicitly allows infrastructure to support reinforcements,” contends Ms Lungescu.

Regarding the statement that Russian President Mikhail Gorbachev was said to have been assured by (then) US Secretary of State James Baker that there would be “no extension of NATO’s jurisdiction one inch to the east”, Ms Lungescu told Sputnik that “Russia has never produced any evidence to back up its claim.”