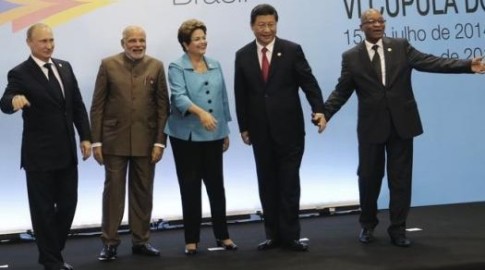 Back in February, Russia detailed a SWIFT alternative that would link 91 domestic banks to the Central Bank of Russia.

On the one hand, the plan represented yet another move towards global de-dollarization but on the other, was borne out of necessity when Russia began to believe it may be expelled from SWIFT as punishment for its support of rebels in Ukraine. Prime Minister Dmitry Medvedev warned of “unlimited consequences” if the West decided on a punitive SWIFT freeze.

Two months later, Moscow would receive a seat on the SWIFT board.

Now, Russia is taking de-dollarization a step further by suggesting that a BRICS alternative to SWIFT may be in the cards. RT has more:

The Central Bank of Russia has proposed a discussion about establishing an analogue to the SWIFT global network for transmission of financial information that processes $6 trillion worth of communiqués daily.

The CBR hopes to cut the risks of possible disruptions.

“Seriously speaking, there is no analogue to SWIFT at the moment in the world, it is unique. The only topic that may be of interest to all of us within BRICS is to consider and talk over the possibility of setting up a system that would apply to the BRICS countries, used as a backup,” said Deputy Governor of the Central Bank of the Russian Federation Olga Skorobogatova on Friday.

This comes as Russia (which, incidentally, is the second heaviest SWIFT user) is set to convene a BRICS summit in Ulfa on July 8-9 where the $100 billion BRICS bank will officially be launched along with a $100 billion currency reserve. Much like the China-led AIIB, the BRICS bank is in many ways a response to the failure of US-dominated multilateral institutions to meet the needs of modernity and offer representation that’s commensurate with the economic clout of its members.

This state of affairs isn’t likely to change anytime soon, because, as we discussed earlier this month, the The White House has signaled it will be unwilling to give up US veto power even if it means setting up and end-around that would allow the Fund to be reformed without the approval of congress. The Washington Post summarized the situation nicely after the 6th BRICS Summit last summer:

Although the BRICS comprise over one-fifth of the global economy, together they wield about 11 percent of the votes at the IMF. But reform to the governance of the Bretton-Woods institutions has encountered a number of roadblocks. In 2008 and again in 2010, quota reform at the IMF was intended to double total financial commitments from all member countries, while at the same time giving BRICS countries larger voting shares. Because this required additional contributions by member governments of richer countries, several balked for different reasons.

Russia is also pressing ahead with plans to establish a Eurasian currency union, something we first discussed a few months back. Here’s what we said in March:

Sputnik News has the latest:

Russia is ready to consider the creation of a currency union with other members of the Eurasian Economic Union (EEU), Russian Prime Minister Dmitry Medvedev said Thursday.

“In this [EEU] format it would be possible to consider the possibility and conditions of eventually creating a monetary union,” Medvedev said.

The prime minister is currently in Kazakhstan for a session of the Eurasian Intergovernmental Council.

The EEU, which officially came into force January 1, 2015, comprises Armenia, Belarus, Kazakhstan and Russia. The bloc seeks to achieve greater economic integration, including the free flow of goods, services, capital and labor across its member states.

With that, we have triple-dose of de-dollarization, as Russia moves to undercut a critical financial communications link by creating an alternative system backed by the world’s rising EM powerhouses who are set to officially launch their own development bank when they convene in July. At the same time, Moscow will consider cementing its economic ties with regional allies via the establishment of a currency bloc.

Paging King dollar: your grip on the throne grows weak.