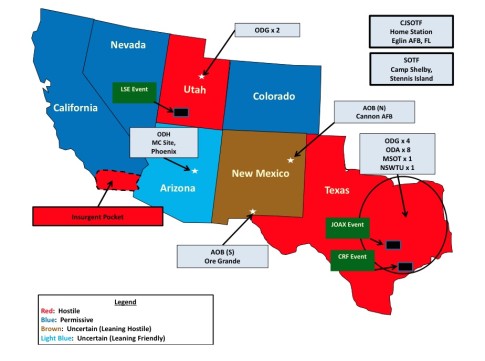 USASOC periodically conducts training exercises such as these to practice core special warfare tasks, which help protect the nation against foreign enemies. It is imperative that Special Operations Soldiers receive the best training, equipment and resources possible.

While multi-state training exercises such as these are not unique to the military, the size and scope of Jade Helm sets this one apart. To stay ahead of the environmental challenges faced overseas, Jade Helm will take place across seven states. However, Army Special Operations Forces (ARSOF) will only train in five states: Texas, Arizona, New Mexico, Utah and Colorado. The diverse terrain in these states replicates areas Special Operations Soldiers regularly find themselves operating in overseas.

The training exercise will be conducted on private and public land with the permission of the private landowners, and from state and local authorities.  In essence, all exercise activity will be taking place on pre-coordinated public and private lands.

The public can expect nothing much different from their day-to-day activities since much of exercise will be conducted in remote areas. The most noticeable effect the exercise may have on the local communities is an increase in vehicle and military air traffic and its associated noise. There will also be economic gain: an increase in the local economy, in fuel and food purchases and hotel lodging.

This exercise is routine training to maintain a high level of readiness for ARSOF since they must be ready to support potential missions anywhere in the world at a moment’s notice.

During this eight-week period, ARSOF soldiers will use this opportunity to further develop tactics, techniques and procedures for emerging concepts in Special Operations warfare.

USASOC intends to conduct the exercise safely and courteously while providing the best possible training available for the nation’s Army Special Operations Forces. State and local officials are being informed of the scope of Jade Helm and will continue to be updated as the exercise progresses.

Got it. So essentially, from July 15 to September 15 some military personnel are going to take a trip out west and pretend like they are conducting covert operations overseas. Doesn’t sound too exciting — but that’s just the press release. The devil, as they say, is always in the details which is why we took some time to look over the Jade Helm presentation (embedded below) to see if we could discern more about the drills. Here are some highlights we found interesting/humorous.

First, there’s the rather amusing state classification map wherein Texas and Utah are deemed “hostile” and where New Mexico is “leaning hostile.” California is “permissive” (we suppose this means the populace has resigned itself to what was probably, were this real, a unilateral invasion by the US military), but unfortunately, there appears to be an insurgency brewing in San Diego.

Next is the section entitled “Why Texas?” wherein the US Army Special Operations Command first explains how patriotic Texans generally are, then hilariously proceeds to suggest (in as polite a manner as possible) that the Lone Star state 1) resembles the type of desert wasteland soldiers might expect to encounter in a modern overseas conflict, 2) is just underdeveloped enough in many areas to give trainees an idea of what it might be like to be operating undercover in a hostile Middle Eastern country, 3) is home to the type of xenophobia which will make the locals approximately as skeptical of “outsiders” as the inhabitants of an occupied country might be but who are at the same time just gullible enough to be tricked into trusting the “invaders,” and best of all 4) is home to social and economic conditions that any normal American would consider “unfamiliar.” Here are some excerpts:

The United States Special Operations Command (USSOCOM) has conducted numerous exercises in Texas, because Texans are historically supportive of efforts to prepare our soldiers, airmen, marines and sailors to fight the enemies of the United States.

To hone advanced skills, the military and Interagency require large areas of undeveloped land with low population densities with access to towns…

Operating in and around communities where anything out the ordinary will be spotted and reported (Locals are the first to notice something out of place). The opportunity to work with civilians to gain their trust and an understanding of the issues…

Basically then, 1,200 special ops soldiers are going to conduct a fake, covert infiltration of Texas because the US Special Operations Command thinks that in a lot of ways, Texas resembles Afghanistan.

That’s ok though, because as the government notes in the informational slide deck, the operation will have a dramatic impact on the local economy thanks to the injection of a staggering $150,000 via the purchase of “food, gas, lodging, and services” for the pretend invaders. That figure may sound small, but remember, we’re suspending reality here and one dollar equals 57 afghanis, so if we stick with the Afghanistan analogy, the government is actually injecting 8,550,000 in local currency.

While we’re certainly concerned about the creeping militarization of American communities (as discussed in detail here), we’re clearly employing a bit of sarcasm in our analysis of Jade Helm, but as one might imagine, many Texans are finding the operation to be no laughing matter. Here’s more via The Washington Post:

At an information session in Bastrop on Monday, command spokesman Lt. Col. Mark Lastoria fielded questions about whether Jade Helm 15 will involve bringing foreign fighters from the Islamic State to Texas, whether U.S. troops will confiscate Texans’ guns and whether the Army intends to implement martial law, according to the Austin American-Statesman.

“It’s the same thing that happened in Nazi Germany: You get the people used to the troops on the street, the appearance of uniformed troops and the militarization of the police,” Bastrop resident Bob Wells told the Statesman after the meeting.

“They’re gathering intelligence. That’s what they’re doing. And they’re moving logistics in place for martial law. That’s my feeling. Now, I could be wrong. I hope I am wrong. I hope I’m a ‘conspiracy theorist.’”

According to the Statesman, Lastoria attempted to assuage residents’ concerns, saying the operation in Bastrop County will take place almost entirely on private land leased to the Army by the owner. And participants won’t be trying to sneak through the population undetected — everyone involved will wear uniforms or orange armbands signaling that they are part of the exercise, he said.

Meanwhile, some websites which The Post describes as being “of varying repute” have gone so far as to posit a link between Wal-Mart’s recent “plumbing” problems and Jade Helm.

We’ll leave it to readers to decide for themselves how far-fetched any or all of this is or isn’t, but surely the punchline to the entire story is that now, Texas Governor Greg Abbott has ordered the Texas State Guard to monitor the Jade Helm exercises. Here is the letter from Abbott to Major General “Jake” Betty:

This surely marks Jade Helm’s “full retard” moment, as you now have a Texas governor pitting the Texas Guard against the US Special Operations Command amid fears the federal government — possibly in conjunction with Wal-Mart — is using special forces to gather intelligence on the way to taking over the state. Only in America.