To be sure, Greece has been “running out of money” for quite some time. Given the incessant media coverage surrounding the country’s cash shortage and the fact that Athens somehow seems to scrape together the funds to make payments both to lenders and to public sector employees against impossible odds, it’s tempting to think that as dire as the situation most certainly is, the country might still be able to ride out the storm without suffering a major “accident.” Having said that, some rather alarming events have unfolded over the past week or so, including a government decree mandating the transfer of excess cash reserves from municipalities to the central bank. As it turns out, that didn’t go over well with local officials and as we reported on Tuesday, the government finally hit the brick wall, coming up some €400 million short on payments to pensioners.

Here’s what we said then:

According to Bloomberg, the Greek government is €400 million short of the amount needed for payment of pensions and salaries this month, citing a Kathimerini report.

In other words, someone is not telling the truth: either there is enough money or there isn’t. And if the latter case is valid, then either the government or the pensions are now openly lying to the population.

Fast forward to Thursday and we learn that sure enough, the government ran out of money earlier this week. Here’s FT:

The Greek government was struggling on Thursday to complete payments to more than 2m pensioners after claiming that a “technical hitch” delayed an earlier disbursement.

Elderly Athenians waited at branches of the National Bank of Greece, the state-controlled lender handling the bulk of pension payments, which are staggered over several days.

On Tuesday, the main state social security fund, IKA, delayed pension payments by almost eight hours. The heavily lossmaking fund relies on a monthly subsidy from the budget to be able to cover its obligations.

“I went to the ATM in the morning before going to the supermarket but the money wasn’t there .  . . I went back at eight in the evening feeling quite anxious but it had arrived,” said Socrates Kambitoglou, a retired civil engineer.

Dimitris Stratoulis, deputy minister for social security, said a technical problem with the interbank payment system caused the delay. Payments were made normally on Wednesday, a senior Greek banker said.

But an official with knowledge of the government’s cash position denied that a technical hitch had occurred. He said the payments were held up because the state pension funds “were still missing several hundred million euros on Tuesday morning”.

Another official said inflows of €500m on Wednesday had eased the situation and €300m was due to be paid on Thursday. “We’re probably going to make it this month,” he said.

Yes, “probably,” considering Thursday is the last day of the month, but what about next month, when some €1 billion in total comes due to the IMF? No one really knows. What we do know is that the banking sector has lost €27 billion in deposits since December, local governments are being shaken down for every last euro, depositors holding cash abroad are being begged to bring their cash back to Greece, and now, pensioners are walking away from ATMs empty handed while Athens furiously scrambles to find cash to pay them. 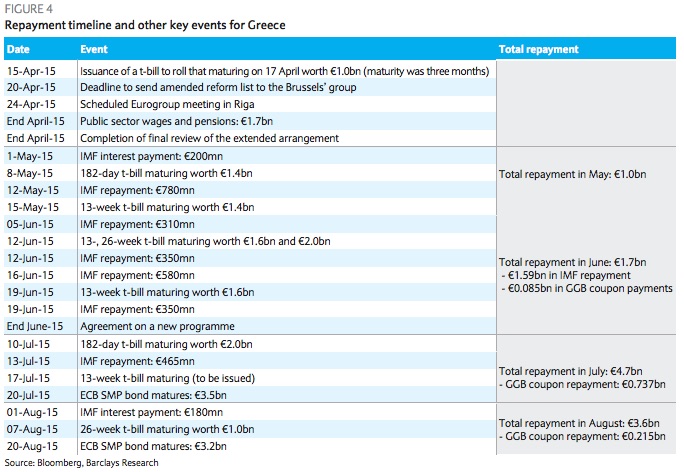 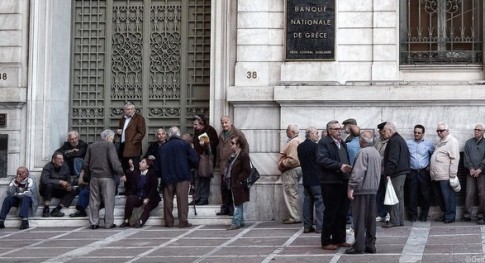