“And right now that propaganda matrix is assuring the American people that everything is going to be just fine.

Well, they better be right. Because if not, they are going to have millions of people extremely angry with them when things really start falling to pieces.”

If enough people truly believe that things will get better, will that actually cause them to get better?  There is certainly something to be said for being positive and thinking that anything is possible.  And as Americans, optimism seems to come naturally for us.

However, no amount of positive thinking is ever going to turn the sun into a block of wood or turn the moon into a block of cheese.  Any good counselor will tell you that one of the first steps toward recovery is to stop being delusional and to come to grips with how bad things really are.

When we deny reality and engage in irrational wishful thinking, we are engaging in something called “hopium”.  This is a difficult term to define, but the favorite definition of hopium that I have come across so far goes like this: “The irrational belief that, despite all evidence to the contrary, things will turn out for the best.”

In hundreds of articles, I have documented how the U.S. economy is mired in a long-term decline which is about to get a lot worse.  But most Americans see things very differently.  In fact, according to a brand new CNN/ORC poll, 52 percent of Americans describe the U.S. economy as “very” or “somewhat good”, and more than two-thirds of all Americans believe that the U.S. economy will be in “good shape” a year from right now.  But if you asked most of those people why they are so optimistic, they would probably mumble something about “Obama” or about how “we’re Americans and we always bounce back” or some other such gibberish.  Well, it’s wonderful that so many people are feeling good and looking forward to the future, but are those beliefs rational?

We witnessed a perfect example of this “hopium” on Wednesday.  Sales at McDonald’s restaurants have been in decline for quite a while, and the numbers for the first quarter of 2015 were just abysmal…

The ubiquitous burger-and-fries chain said US sales, the largest share of global income, fell 2.6 percent from a year ago for comparable outlets.

So you would think that the stock price would have tanked on Wednesday, right?

Thanks to news that a “turnaround plan” would be announced on May 4th, McDonald’s stock actually skyrocketed…

McDonald’s closed up 3.13 percent after spiking more than 4.5 percent in early trade as investors cheered a turnaround plan expected on May 4. However, the fast food chain’s earnings missed on both the top and bottom lines.

This is pure hopium.  Why don’t McDonald’s executives just tell us what the plan is now?  But instead, the mystery of a “secret turnaround plan” gives people just enough hope to keep the stock from tumbling – at least for the moment.

And of course there are all sorts of other stocks that are being massively inflated by hopium right now.

Many years ago, when I was an undergraduate, I was taught that a price to earnings ratio of more than 20 was really, really high.

But these days that is the norm on Wall Street, and at the moment there are quite a few stocks that actually have price to earnings ratios that are greater than 100…

There are 10 stocks in the Standard & Poor’s 500, including industrial giant General Electric, video-streamer Netflix and oil and gas explorer Cabot Oil & Gas that are trading for 100 times their diluted earnings the past 12 months excluding extraordinary items, according to a USA TODAY analysis of data from S&P Capital IQ.

And if you can believe it, General Electric has a PE on its training earnings of more than 200…

Take General Electric, the industrial giant that’s swiftly selling off banking assets so it can return to its manufacturing roots. GE sports a PE on its trailing earnings of 227, says S&P Capital IQ.

This is completely and totally irrational.  General Electric is a giant mess and is being very badly mismanaged.  But investors continue to pay a massive premium for GE stock because they hope that things will turn around eventually.

Look, hope will get you a lot of things in life, but it won’t put money in your pockets or dinner on the table.

Our politicians and the mainstream media continue to sell us hard on the idea that things are getting better in America, but meanwhile our economic infrastructure continues to decay.  Just check out what is happening in the steel industry…

United States Steel Corporation issued layoff notices to 1,404 workers in the latest sign of struggle for the American steel industry. The missives went out in recent days to workers producing pipe and tube products that are used in the oil and gas sector. Job cuts could come as early as June for 17 to 579 employees at a plant in Lone Star, Texas, 166 at a factory in Houston, 255 at a mill in Pine Bluff, Arkansas, and 404 managers across the company’s tubular operations nationwide.

Since last June, the company has informed 7,800 employees of potential job cuts, a tally from Pittsburgh Business Times indicated. U.S. Steel spokeswoman Sarah Cassella said the ongoing layoffs are the result of “challenging market conditions and global influences in the market including a high level of imports, reduced prices for oil and natural gas and reduced steel prices.”

A little over a month ago, I published an article entitled “10 Charts Which Show We Are Much Worse Off Than Just Before The Last Economic Crisis” in which I demonstrated that we are in far worse economic shape than we were just prior to the last recession, and now another great economic crisis is at our door.

Unfortunately, most Americans have no idea what is going on out there.  Most of them get their news from the giant propaganda matrix that very tightly controls the flow of ideas and information in this country.  This is something that I explain on my new DVD.  Six colossal corporations control over 90 percent of the news, information and entertainment that Americans consume, and that gives them an awesome amount of power.

And right now that propaganda matrix is assuring the American people that everything is going to be just fine.

Well, they better be right.  Because if not, they are going to have millions of people extremely angry with them when things really start falling to pieces. 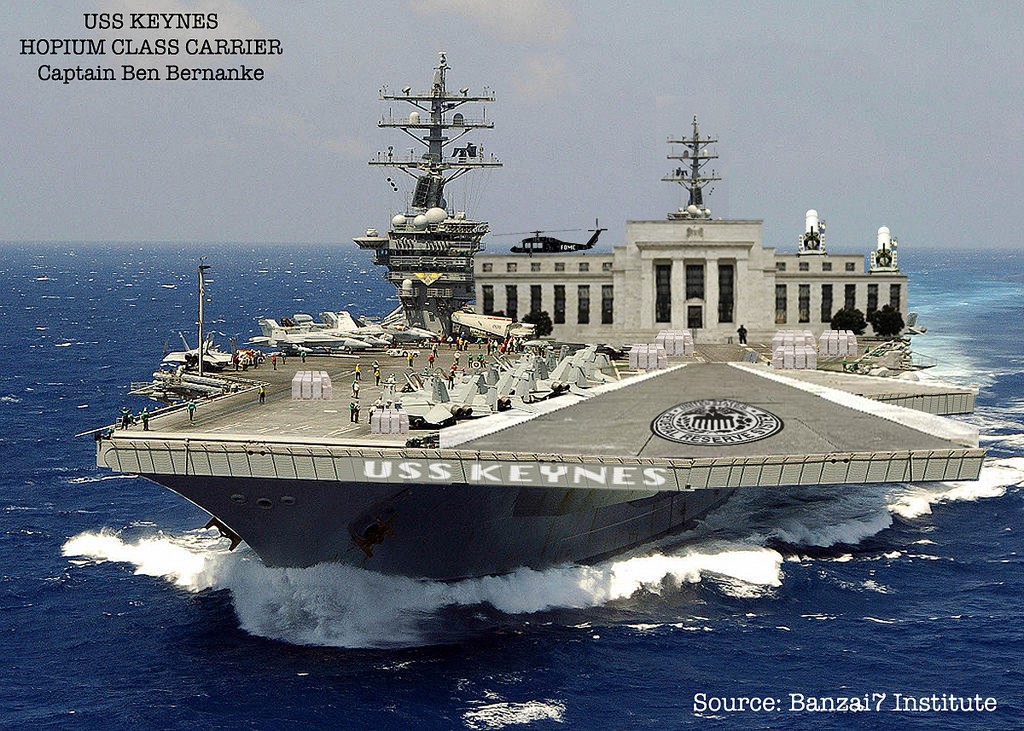 1 thought on “Hopium: How Far Can Irrational Optimism Take The U.S. Economy?”