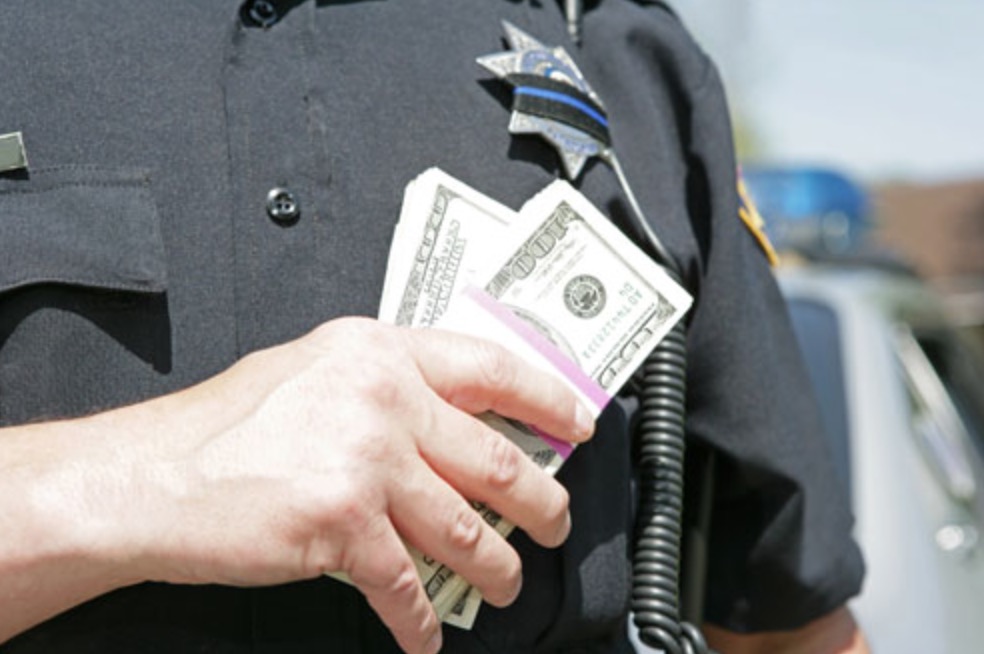 What’s so shocking about the story below is not that a 20-year veteran of the Houston police force, who was previously named one of the “Officers of the Year” by the Officers Union, was trafficking weapons for drug cartels. What’s shocking is that he was actually indicted and faces life in prison. He should’ve worked for a federal agency like the DEA or TSA, in which case he might not have even been fired. For example:

We learn from KPRC 2 News in Houston that:

Juarez was arrested last week after he was indicted in New Orleans for conspiracy to distribute 5 kilos or more of cocaine.

Both video clips were recorded in the parking lot of the now defunct “El Chapparel” club where Juarez worked off-duty as a security. One clip recorded in March 2011 shows Juarez in uniform allegedly delivering two assault rifles to a government informant investigators say he assumed was a major drug trafficker. The FBI alleges Juarez received a total of $4,500 for the guns and was told they were being shipped to Mexico.

A second video, recorded in July 2011 allegedly Juarez providing the informant information about two license plate numbers he allegedly ran through the HPD database at the request of the informant. Agents say Juarez was told the plates belonged to people who owed $800,000 in drug money. In the video, Juarez supplied a name and address from one of the plates, allegedly in exchange for $500.

In the event you haven’t exceeded your police shadiness ration for the day, did you hear about the Arkansas attorney who claims local police installed malware on his computer because his clients are whistleblowers? You can’t make this up. From Arstechnica:

The hard drive was provided last year by the Fort Smith Police Department to North Little Rock attorney Matt Campbell in response to a discovery demand filed in the case. Campbell is representing three current or former police officers in a court action, which was filed under Arkansas’ Whistle-Blower Act. The lawsuit alleges former Fort Smith police officer Don Paul Bales and two other plaintiffs were illegally investigated after reporting wrongful termination and overtime pay practices in the department.

According to court documents filed last week in the case, Campbell provided police officials with an external hard drive for them to load with e-mail and other data responding to his discovery request. When he got it back, he found something he didn’t request. In a subfolder titled D:\Bales Court Order, a computer security consultant for Campbell allegedly found three well-known trojans, including:

“Additionally, the placement of these trojans, all in the same sub-folder and not in the root directory, means that [t]he trojans were not already on the external hard drive that was sent to Mr. Campbell, and were more likely placed in that folder intentionally with the goal of taking command of Mr. Campbell’s computer while also stealing passwords to his accounts.”

Surely there will be an investigation into the matter and we’ll get to the bottom of this, right? Wrong.

Last September, Arkansas State Police officials declined Campbell’s request that the agency’s criminal investigation division probe how the hard drive sent to Campbell came to be booby-trapped. “The allegations submitted for review appear to be limited to misdemeanor violations which do not rise to a threshold for assigning a case to the CID Special Investigations Unit,” the commander of the CID wrote in a September 29 letter declining the request. The prosecuting attorney for Arkansas’ 12th Judicial District has also declined Campbell’s request to investigate, saying the district doesn’t have the technical resources to conduct such a probe. The prosecuting attorney went on to say the US Justice Department may have the legal authority to probe the matter.

More of that famous American justice for ya.