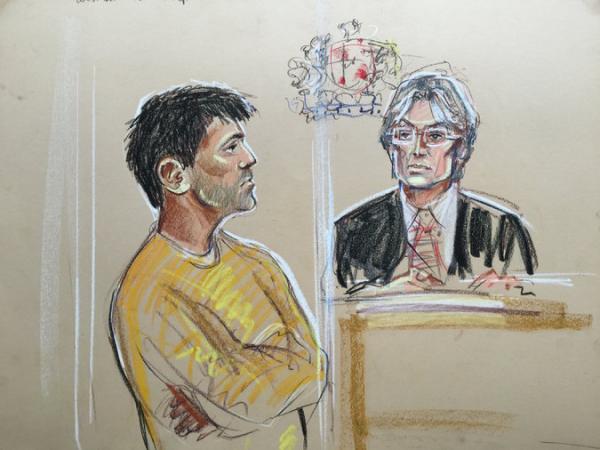 – Why Sarao Is The Flash Crash Patsy: He Threatened To Expose The “Mass Manipulation Of High Frequency Nerds” (ZeroHedge, April 23, 2015):

There are several notable items in Bloomberg’s comprehensive overnight summary of the epic humiliation America’s market regulators are about to undergo, complete with yet another round of theatrical Congressional kangaroo courts, which will lead to a lot of red faces, a wrist slap or two and maybe even the termination of one or two lowly employees and… nothing else.

Because what difference does it make?

At this point only a bottom-up overhaul can “fix” the fragmented, broken market which by definition can only come after the next market crash, one which will promptly be blamed on HFTs (which leaving the central bankers unscathed).

Back to the Bloomberg piece in which we first discover that it wasn’t even the CFTC that, 5 years later, “figured out” the flash crash was one person’s fault:

When Washington regulators did a five-month autopsy in 2010 of the plunge that briefly erased almost $1 trillion from U.S. stock prices, they didn’t even consider whether it was caused by individuals manipulating the market with fake orders.

Their analysis was upended Tuesday with the arrest of Navinder Singh Sarao — a U.K.-based trader accused by U.S. authorities of abusive algorithmic trading dating back to 2009. Even that action was spurred not by regulators’ own analysis but by that of a whistle-blower who studied the crash, according to Shayne Stevenson, a Seattle lawyer representing the person who reported the conduct.

Your tax money not at work.

But fear not: after today’s Deutsche Bank $2.5 billion “get out of jail” card, the CFTC will be $800 million richer and can finally even afford to hire a former trader who has some understanding of how the market works.

Second, the reason why the SEC wrote a 104-page report with “findings explaining the Flash Crash” which it will have no choice but to retract in light of the latest news and developments, is the following:

Spoofing wasn’t even part of the CFTC’s analysis of the crash, said James Moser, a finance professor at American University who was the agency’s acting chief economist in May 2010. The flash-crash review marked the first time that the agency worked through the CME’s massive order book. CFTC officials often needed to call the exchange for help interpreting the data, he said in an interview.

“We didn’t look for any sort of spoofing activity,” said Moser, who added that he doubts that Sarao’s activity was the main cause of the crash. “At that point in 2010, that wasn’t high on the radar, at least in our minds.”

So the CME, which is the exchange that trades the E-mini, “concluded within four days of the 2010 flash crash that algorithmic trading on futures exchanges didn’t exacerbate losses in the market,” and a few months later, so did the SEC, which instead pinned the entire crash on Waddell & Reed. And the way it did it was by completely ignoring about 99% of all posted quotes: the layered and rapidly canceled trades or what we dubbed “quote stuffing” one whole month after the Flash Crash, in June. In fact we even explained it to anyone who cared to listen: “How HFT Quote Stuffing Caused The Market Crash Of May 6, And Threatens To Destroy The Entire Market At Any Moment.”

Shockingly, the SEC appeared in front of Congress claiming it has everything under control, when it now admits it never even looked at spoofing.

But that is nothing compared to the third revelation in the Bloomberg report, namely that the CME had interacted with Sarao, even on the day of the flash crash. The exchange contacted him about his trades after concluding he appeared to be significantly swaying opening prices. The same CME, mind you, which days after the Flash Crash determined that algo trading wasn’t the cause of the market crash.

Sarao explained some of his conduct to the CME in a March 2010 e-mail as “just showing a friend of mine what occurs on the bid side of the market almost 24 hours a day, by the high-frequency geeks.”

And the reason why nobody touched Sarao until just days before the 5 years statute of limitations following the Flash Crash had run out, is the following:

He then questioned whether CME’s actions regarding his activity meant “the mass manipulation of high frequency nerds is going to end,” according to the U.S. Department of Justice’s complaint released Tuesday.

The answer was no – just his own. And this was his fatal move:

Sarao, who goes by Nav, also said his investing style was a reaction to high-frequency traders, who he said could manipulate the market based on his orders without any repercussions. He said his software and his distance from Wall Street made his transactions “miles too slow” to compete with flash traders operating out of the U.S.

“I don’t like the HFT arena and have complained to the exchange numerous times about their manipulative practices, please BAN IT,” Sarao told the FCA in the May 2014 e-mail.

One of his letters to the UK regulator: 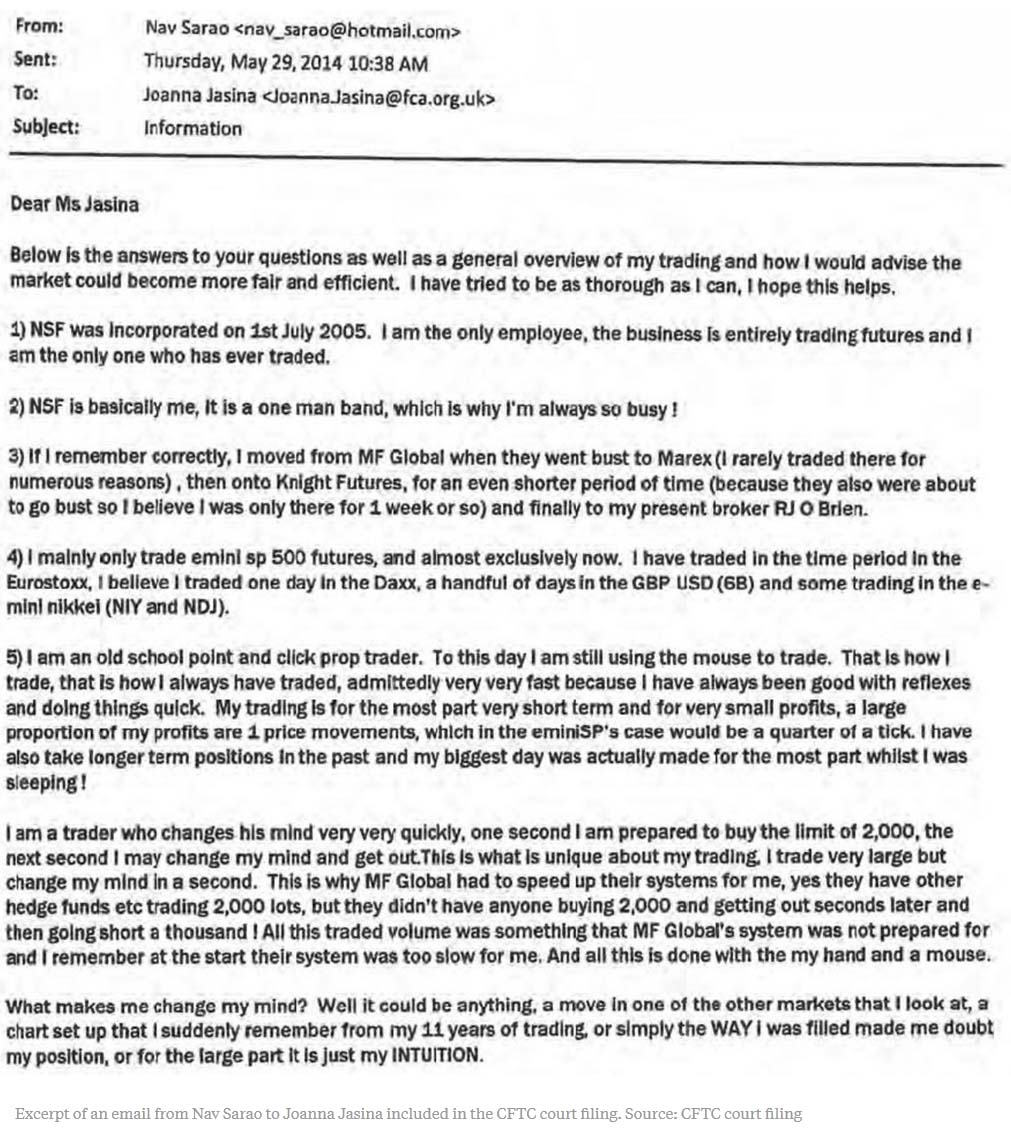 Which that is why Sarao became the designated patsy for what is now a market that is manipulated by rogue, parasitic algos beyond recognition: he dared to threaten the status quo.

As for the the market, it is still “mass manipulated by high frequency nerds”, and will continue to be, until they themselves become the sacrificial lambs after the next historic market crash.

1 thought on “Why Sarao Is The Flash Crash Patsy: He Threatened To Expose The “Mass Manipulation Of High Frequency Nerds””