According to Akio Doteuchi, a senior researcher at the NLI Research Institute, what is threatening people here is that, under the current social structure, virtually anyone in the middle class is at risk of falling into poverty.

“It’s like walking in a mine field. Many risks lie ahead of you,” Doteuchi said. “Even if you are in the middle class, if something unexpected happens, you could slip into poverty.”

Such risks could include contracting diseases such as cancer and being unable to work, the failure to land a job soon after graduation, or an ill parent who needs looking after.

The big problem in Japan is that there are few social safety nets for such situations. In the past, workers had been shielded by the guarantee of lifetime employment at companies. When they retired, they were supported by family members, Doteuchi noted.

But now, there is an increasing number of nonregular workers, particularly younger ones, whose financial situations are unstable. More and more single-person households are vulnerable to serious health problems.

Data back this up. According to labor ministry figures announced April 1, the number of households living on welfare hit a record 1,618,817 in January. This figure has been on the rise for the last two decades.

The country’s relative poverty rate has also edged up over the last 30 years, especially with single mothers and fathers raising children, although the latest data are for 2012.

Meanwhile, the rich are getting richer (as they are prone to do anyway but especially so under monetary policy regimes explicitly designed to inflate financial assets).

On the other hand, data also show that the rich became even wealthier under Abe’s tenure.

Their numbers and the amount of their assets surged in 2013 and are still rising mostly due to sharp gains in stocks triggered by the Bank of Japan’s aggressive monetary easing, which started in April 2013, experts said.

According to the Nomura Research Institute, the number of wealthy households jumped 24.3 percent, with the amount of their total financial assets rising 28.2 percent in 2013, compared with 2011 figures…

Households on average are believed to have a majority of their assets either in bank accounts or in cash. But the wealthy hold risk assets such as real estate, stocks and bonds — assets more likely to grow in value faster than mere savings accounts, Miyamoto said.

Of course the real punchline when it comes to the Japanese QE experience is that the so-called “wealth effect” — which certainly makes the wealthy wealthier but exactly how far down the benefit ultimately trickles is up for debate  — is on steroids because not only is the central bank helping to push up the prices of the financial assets held by the rich, the BoJ actually won’t let them fall, as we recently discovered when it was revealed that the bank intervenes in morning trading when sentiment seems less than euphoric. In other words, they are more than “supportive”, they have openly rigged the system, and we don’t mean in a kind of “behind the scenes the market is rigged by HFT firms that never have losing trading days” type of way — we mean in a blatant “we’ll print money and buy every single ETF that trades if we have to in order to ensure that stocks don’t fall” type of way. But we guess the fact that this is increasing the disparity between the haves and the have-nots is just further evidence that, much like poor people in the US, Japan’s poor similarly don’t understand Janet Yellen’s extolling of the virtues of having assets.

Here’s The Japan Times again to sum things up:

“Abenomics has boasted economic strength, telling people that higher economic growth will shrink the gap between the haves and have-nots via the trickledown effect,” Doteuchi said. “But is that really true? I think not. Solving inequality is the way to improve the economy.” 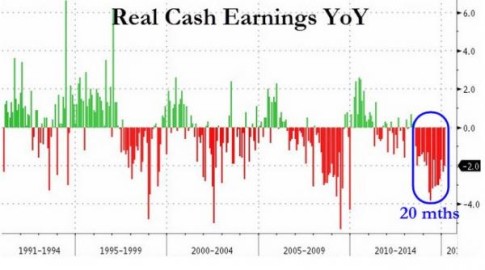